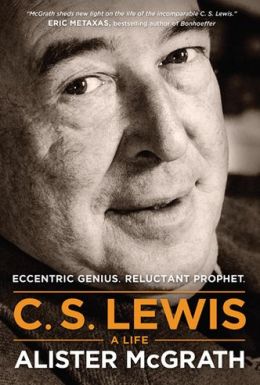 I’ve been fascinated with C.S. Lewis in a arms-length sort of way for quite some time. I read the Chronicles of Narnia in late grade school and loved them. I rediscovered and reread them with my husband when the first movie came out in 2005 and loved them even more.

His fiction has continued to fascinate me since my childhood, though I didn’t start really reading it until The Screwtape Letters in 2006 and then following with an immersion in the Ransom (Space) Trilogy, both of which I highly enjoyed. Screwtape, in fact, ranks as a book I keep multiple copies of, because I hate to not have it on hand. It’s better than an examination of conscience in many ways. 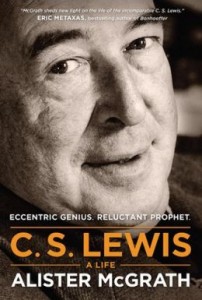 So I was very interested in the Patheos Book Club’s discussion of the newest C.S. Lewis biography, C.S. Lewis–A Life: Eccentric Genius, Reluctant Prophet, by Alistair E. McGrath. And then, about 20 pages into it, I remembered something: I don’t usually like reading biographies.

Thankfully, that was a hurdle that lasted only a chapter or two until I found myself embroiled in Lewis’s life, wondering how the background he had could have led to the writing I so enjoy reading.

It was fascinating…and very, verrrrry thorough. I have only a very slight scholarly bend (don’t let the title of my blog fool you), but I can appreciate the work that must have been poured into this book.

While it’s very complete–from birth until death, and even a consideration of the lasting impact of Lewis’s work–it did also make me think about things I wouldn’t have ever considered before. It made me think about the people who impacted him and the way they colored who he was to become. It made me consider in some depth how much a parent does for a child.

It also made me wonder: what happened to his stepsons? Who were these godchildren of his? What did he do when he wasn’t immersed in the academic life (gardening and walking the dog aside)?

I found myself seeing Lewis as both a guy with enormous talent and also a genius with incredible hurdles. I felt compassion for the young boy and joy for the older man. I was befuddled with his later choices and yet intrigued by his view of Narnia and the role of stories.

This biography made me want to not only reread the Narnia books with an increased appreciation for Lewis’s worldview, and it also made me want to read Mere Christianity (a book, honestly, I’ve never really felt a need to read).

Throughout this book, McGrath keeps an observer’s stance–he interjects his own thoughts and comments only a few times, and when he does, it’s clear that he’s put a lot of thought into them.

Reading this book was a slice of history, and the kind of history I really enjoy. It’s a story, and one I’ll be sharing (probably with my husband, first of all), and maybe even one I’ll be rereading sometime in the future.

I’m glad I read this, and I found I couldn’t put it down. It was thoroughly engaging and completely enlightening. Highly recommended!

Focusing on the Present

A Boost to My Parenting Ego