A Day of Firsts at the Fair 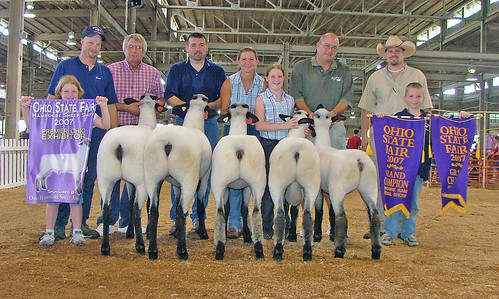 …first place in quite a few classes, including quite a few my brother-in-Law didn’t think he would win (humble guy, that one)

…first place flock (that’s the group of animals pictured here – it has to include a ram, a yearling ewe, and ewe lambs…and there have to be five animals total, so I think I’m not quite explaining it right, but that gets you close)

…first time to have both Oldest Niece and Nephew Farm Boy out in the ring and back in the pens helping seriously (“Hey, Farm Boy, go get the January ewe lamb ready as soon as the judge starts talking”)

…first rate smiles all around!