Outside my window: It’s dark, the windows black. It’s also cold. I’m happy to stay in the kitchen, hugging my mug of coffee.

Rambling thoughts: At Mass last night, Father said something that caught my attention: “God doesn’t micromanage.” He referenced the prophet Micah, and I had to go look it up, because he said that Micah told the people to quit trying to figure out what God wanted and to simply walk humbly with God. His examples, in his homily, had to do with a friend who was always discerning, trying to figure out if God wants him to do A or B. Father’s response is, “Yes! Do A; God will be with you. Do B; God will be with you. They are both good things.” As I’ve thought about it, I think the underlying lesson that I get from this, at least at first, is one of free will–this is what free will is, the choosing between two things. The bottom line is to be in God’s company, and to be humble so as to hear the still, small voice he’ll use to get my attention.

In thanksgiving: For early morning prayer and coffee. For a pew filled with family at Mass most weeks. For a niece who cracks me up nearly every day.

Folded hands, bowed head: For a special intention. For those who face financial difficulty, especially those who are out of work. For an end to abortion.

Kitchen meanderings: This week, I am going to stick to a menu. Granted, I have to make that menu, but my life will be better, easier, and smoother at the point when I most need it to be those things. I know we’ll be having breakfast for dinner one night. Maybe we’ll have notsanga too. My six-year-old requested tacos (which, to her, means unseasoned ground beef and cheese in a shell), and I know just which night we’ll be doing that. What’s on your menu this week?

Nose inserted: Ah, Theophilos, by Michael O’Brien, is distracting me from all other reading in the most delightful ways! I would like to just immerse myself and neglect all other things to read it and finish it. I’m past the halfway point, and if I get a nice stretch of reading time today (yay for Sundays!), then I think there’s a chance I’ll be finishing it this week. Then I’ll return to the hilarity of Neeta Lyffe: Zombie Exterminator, by Karina Fabian (which I’m reading electronically), and the wisdom of Walking Together: Discovering the Catholic Tradition of Spiritual Friendship, by Mary DeTurris Poust.

Recent reads: A Catholic Woman’s Book of Prayer, the latest by Donna-Marie Cooper O’Boyle. It’s wonderful in all the right ways. Great for busy women, but also with enough “meat” to foster good devotional time. It would make a great companion for a discussion group. I found myself dog-earing favorite pages and was pleasantly surprised that it was, in fact, possible to read through it as an actual book (it flows), though you wouldn’t have to.

In my ears: The sound of the dryer, the click of the baby swing, the overriding silence of early morning. I’ve been on a podcast-listening kick lately, but tomorrow’s a big writing/revising day, so I’ll be tapping into my Ave Maria playlist (which has had some additions recently, thanks to the comments and my own discoveries) and my collection of favorite songs (including, but not limited to, Taylor Swift).

Around the house: My kitchen floor needs some special attention, the piles of baskets in the corner need folded, and there’s a toy sorting project that awaits me. I find myself longing for clutter-free areas in my house, and that’s what I’m going to spend the next few weeks achieving (with the help, I hope, of my favorite motivator in areas of housework and cleaning, my amazing mother-in-law).

A favorite thing: A completed project…I almost have one of those (a manuscript!), and it’s delicious in the anticipation (and even better once it’s sent! gone! goodbye!).

Plans made, possibly kept: It’s time for a date. The problem, though, is determining what to do. If the weather was nice, I’d be out on the golf course with my honey in a heartbeat. We’ll have to fly far south to find good golfing weather, though. Maybe next weekend, we’ll carve out date time. As for the week ahead, it involves the usual stuff, with the promise of meeting George Weigel at the end. (He’ll be at my favorite Catholic bookstore for a book signing!)

Food for thought: “You have been told, O man, what is good, and what the LORD requires of you: Only to do the right and to love goodness, and to walk humbly with your God.” Michah 6:8 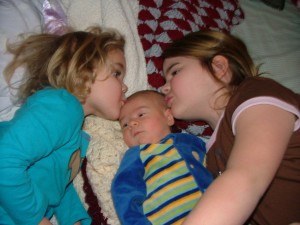 Beginning of the Week Daybook