This is the first in the guests posts by Brittany in the Different Perspective series. 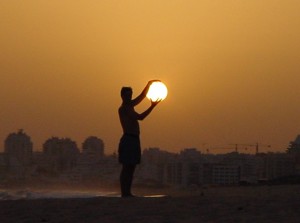 Sometimes, I really feel like my personal beliefs are a character flaw rather than an important freedom.  Maybe “failed Christian” would be a more appropriate moniker, because although I am an atheist now, two very significant periods of my life were spent in worship: my childhood and my late teens.

I was raised by Methodist parents, who were themselves raised by Methodist parents, who were raised by Quakers and Baptists and Methodists, and there might even be some Catholic ancestors, because I have Catholic great aunts.  But the point is that my family is Christian, through and through, and during my formative years, I spent every Sunday in church, every summer in Bible school, and every evening saying the Lord’s Prayer before bed.  So if I’m atheist, it’s surely not the result of apathetic parents.

These imaginary characters seemed more real than God.  No one knows what God looks like; he “works in mysterious ways” (which meant I should ask Santa, rather than God, for the Barbie Doll, and that no matter how much I prayed, Mommy and Daddy couldn’t stay home to play with me all day).  To a child, God is the least tangible of the “imaginary” characters, but He turns out to be the only genuine article.  My little kid self thought that something was wrong with that picture.

Next week, Brittany continues the series with “Child Skeptic.”

Finding Christ in the Wedding Details

A Different Perspective: A Series by an Atheist