A Last Half of May Daybook

Outside my window: The curtain’s closed, but the sunshine is seeping in along the edges.

In thanksgiving: For two healthy baby nephews. For a husband who offered to take time off this week. For the realization and confirmation that feelings are not reality. For Mother Mary, who holds me in my distress (mental “only” though it may be).

Nose inserted: Sea Changes, by Gail Graham, and The Glories of Mary, by St. Alphonsus Liguori, and tonight, I’ll probably finish off a chapter of Saving Dinner Basics: How to Cook Even If You Don’t Know How, by Leanne Ely.

In my ears: Right now it’s my Ave Maria playlist, which I listen to lately during my morning writing, though I threw the writing time out of the window in recognition of a certain mental state that would make it implode anyway. Later, I’ll probably listen to Taylor Swift, thanks to my sister, who I saw this weekend and who shared her CDs with me. 🙂

Around the house: In the living room, my young adventurer is playing with my old Barbies, which my parents saved (I’m going to have to write a special thank you to them for that). She’s been particularly smitten with the box of clothes that came with these old, ratty-haired Barbies. There’s been no segregation of “new” Barbies (meaning the ones she already had, all four of them) and these old Barbies. My Barbies have a selection of evening gowns and dresses that are a little worse for the years that have passed, but that are no less glam and sparkly and, well, cool to Babs. The rest of the house is quiet and dark (except where the sun is seeping in).

A favorite thing: The sound of my older girl making my younger girl giggle, and then laugh, in great peals that are contagious.

For the rest of the week: Today, the dentist for my four-year-old. There’s at least one cavity in her mouth, and I found out on Friday that this very highly recommended pediatric family dentist is out of network. I’m going anyway, though I think that, for myself, I’ll go to someone local who is in network. Last night, my mother-in-law mentioned that the weird little bumpy thing on my gum could be a canker sore but could just as easily be an abscessed tooth (she was trained in oral surgery back in her youth). I’ll probably try my best to get an appointment for myself this week. I also have some figuring out to do at work, and some writing to do at home, and since the weather looks nice, I’m going to try to work in a trip to the zoo somewhere.

Food for thought: A baby is God’s opinion that the world should go on. –Carl Sandburg

Worth a thousand words: My girls moon over baby Gabriel: 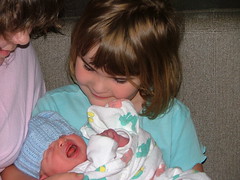 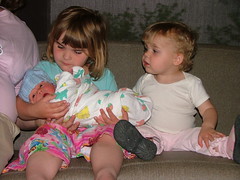 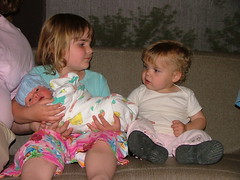 Message on a Board

Who Needs a Desk Anyway?