A Word on Word Choice

Posted by Sarah Reinhard | Inspired by the Virgin Mary, writing | 4 | 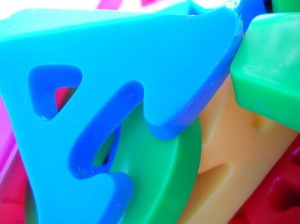 Yesterday, in my post about change and how hard it is, I used a word that I don’t use often, believe it or not, though it used to be a word I used a lot.

The word I used was “sucks.”

Maybe that’s not the best word choice.  But it’s the one that resonated with me, the one that spoke best to what I was trying to get across in that post.

I am not writing here to defend or explain my word choice, but to explore something else, something that fascinates me endlessly as a writer and a reader, a mother and a friend, a woman and a conversationalist: the topic of the words we use.

People who know me well and have known me for years know that my use of words has changed over the years.  I used to have quite a potty mouth, and in the right amount of stress, I often default to some of the slang and violent language that was such a habit in the past.

“Sucks” is one of those words.  I don’t like it.  I would prefer to feel challenged or pushed or tested.  The truth is, though, that sometimes words like “sucks” explain exactly how I feel and make exactly the point I want to make.

I realized this morning that I had revealed to you something I didn’t necessarily intend to reveal.

That is a bit of truth about myself.  It’s also a bit of what makes a writer or a personality approachable and real, isn’t it?

I’m not perfect.  I know I say that a lot, but in yesterday’s post, you had a glimpse of it in a way you rarely do.  You can believe, now, that I have ticked family members off (often), that I have let people down (frequently), that I have failed (and will fail again).

So often, people tell me that they struggle with devotion to Mary.  I so understand this.  I’ve looked at her from across the church, holding a squirming toddler.  I’ve punctuated my struggles with Miss Five-Year-Old Attitude with glances at her.  She looks so flawless, so unapproachable.

Mary probably didn’t use words that make me wince in the “I shouldn’t say that” part of my mind, but she must have felt those feelings that inspire me to use them.  The feelings are human; the response is where my choice to sin or not to sin comes in.  (Is using “sucks” a sin?  Probably not.  In fact, I’d say No.  Some of the other words I might use, though, I wouldn’t say No with such confidence…)

The reminder, the lesson, is to let Mary be my guide in word choice as in all else.  She never fails to lead me to her Son, if only I’ll look to her and get over the hurdle of what I see as the distance between us.

The distance, you see, came from me.  I’m the one who walked away, who imagined it there, who grew it to the size it is.

She’s been over my shoulder, trying to hold me closely, all along.

May she hold you closely too, in your word choice as in all else.

I love iBreviary (and the Liturgy of the Hours).

Looking Closer at the Hail Mary: OUR

Growing into the domestic church you’re called to