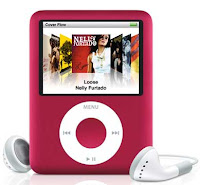 Image source
Sometimes, I get an idea that won’t leave me alone. It will work its way into my prayer time, be the thing that comes to me as I drift off to sleep, come to me at odd times during the day. Just before Advent started, I had this idea that I needed to turn off my iPod.

But…but….but…my protests began, in increasing volume in my head, How will I keep up on those great Catholic podcasts I listen to? How will I pray the spiritual Rosary? How will I…listen to my iPod?

That last might sound ridiculous, and it is what clued me in to the fact that this wasn’t my idea. I would never voluntarily turn off my iPod. In the year that I’ve had it, I do think I’ve become a better Catholic, better educated, and better listened. I have become part of a larger community, and my iPod has easily become my favorite gadget. I listen while I drive, I listen while I work, I listen while I put the baby to bed. It’s the perfect companion for doing dishes, folding laundry, and working out. As near as I can tell, my iPod is perfect.

However, in the year that I’ve had earbuds plugged in, I’ve also had less silence. There hasn’t been the time to be reflective, because those odd moments of nothing-else-going-on have been conveniently filled with a podcast or audio Rosary. Neither of those are bad things in and of themselves, but as I thought more about turning off my iPod for Advent, I came to see the wisdom in it.

I have a tendency to go too far with things, to get addicted. It happened when I got my first laptop and high-speed internet connection. The resulting correction was offline evenings, which restored the balance while not limiting the good I experienced from the online community I was now a part of. I realized, when a few different people made comments to me about my iPod and I responded enthusiastically about my love for it, that things were getting out of balance.

Advent is only four weeks. Four weeks of silence, of listening to the still, small voice that has been drowned out in podcasts and audio books. Four weeks of remembering how I used to pray the Rosary the old-fashioned way, one decade at a time or all at once at the kitchen table, on my fingers or using a guide, in the shower or in the car. Four weeks of preparing for a baby in the best way possible, by slowing down and enjoying life around me.

I’ll be turning my iPod back on, but perhaps, just as I have offline evenings, I will have mute mornings or two show Tuesdays. (Or, possibly, I’ll have something less alliterative.) When I turn it back on, though, I’ll do it with a mind to the silence I’m savoring this Advent.

Nothing’s Too Small for God