The Art of Spiritual Writing: Patience Is Key

Every so often, I get the chance to host someone here in my little cybersandbox who makes me feel like maybe, just maybe, I have Become A Real Blogger. Today is one of those days as I join the blog tour for Vinita Hampton Wright’s latest book, The Art of Spiritual Writing. 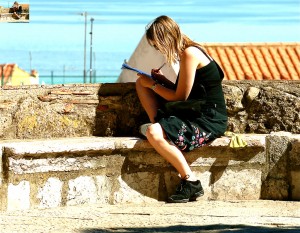 When it comes to creative work, most of us are not patient enough. The culture I live in—United States, 2013—stresses productivity and profit, and both of those are iffy terms in the creative sphere. Is it productive to write twenty pages, out of which you’ll actually use five? Is it profitable to put your wisdom and turns of phrase on a blog that does not pay you a salary or even a decent fee?

If we’re serious about writing for the benefit of healthy, growing spirituality, then we must apply the same principles that undergird healthy spirituality. One of those principles requires that we toss out cultural norms and redefine terms according to the realm of faith.

So, “productive” means that I write and write and wrestle and wrestle and rewrite and rewrite until what I produce is true, stunning, and too important to be missed. That kind of productivity wastes a lot of time. But I believe in a wasteful God—who needs so many wildflowers that no one even sees? Why so many shades of the color green, when only a couple would have been pretty awesome? In the holy economy, we can waste and linger and dream and keep trying. I consider that, in the writing life, revision is just another word for redemption.

The term “profitable” irritates me on a constant basis. Thanks to gargantuan companies who consider that nothing less than billions of dollars is profitable, we have an increasingly unhealthy environment and a growing population of people living in poverty. Thanks to the scary economy created by greed, book publishers rarely take a chance anymore on a new voice, an unproven writer. They are more likely to stick with the sure thing, even if it’s been done again and again.

In the creative realm, “profitable” must take on a more spiritual, more open-ended meaning. Of course we need a book to sell enough to pay for itself. But those of us who publish as a ministry consider a project profitable if it helps people live better, if it encourages them, sets a better example, fuels their faith, helps them envision the kingdom of God, and helps them heal from the damage this world inflicts upon them.

As a writer who often focuses on spirituality, I know that I must live with my writing, sometimes for a long while, before the best parts of it become clear, before I come up with the right words to describe for people the spiritual reality they live every day. I might get paid for my work, or I might not, but my intent and my commitment is that anyone who reads what I write will definitely profit from it. If my words do not edify the reader (yes, edify is an old, biblical word, but I like it), then perhaps all my time with it really is wasted time.

If you want to write spirituality, I encourage you to meditate on why you value this task and what you hope to accomplish through it. And please, decide that you will learn patience.

Vinita Hampton Wright grew up in Kansas, majored in music education, taught for a few years—first in the country of Jordan and then in the state of Missouri, went to grad school and changed her career to publishing in 1990. She’s been editing books for Loyola Press for 15 years. She is, in short, awesomesauce incarnate, and if you’re not already reading her, you should be.