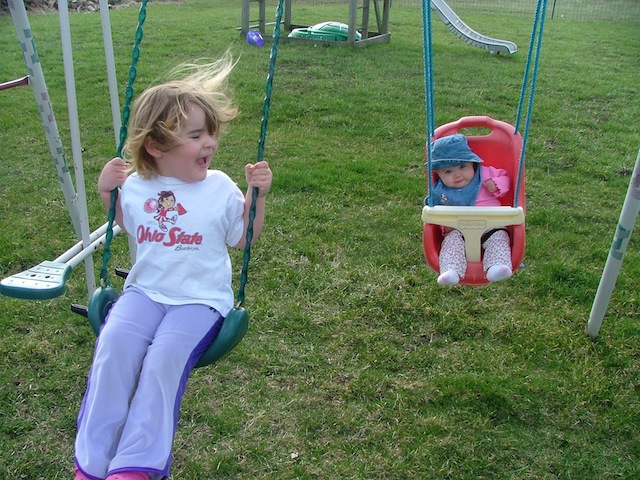 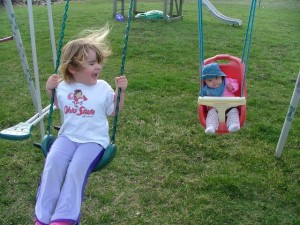 I was minding my own business, really, talking to a mom friend and pushing my toddler on the swings.

I didn’t ask the little boy to come up to me.  I didn’t even smile his way.

But he did come up to me.  He wasn’t shy at all, and he even smiled as he asked me to push him on a swing.

“Is your mom around?” I asked him, hesitating.  It’s not that I didn’t want to be friendly, but I wasn’t sure about this.  We live in the country, and I have no idea what the unwritten rules are for pushing a strange kid on a swing.

He was undeterred.  I looked at my mom friend, who lived in the neighborhood, and she shrugged.

I shrugged back and figured it would be OK.

I lifted him up and put him in the swing.  I started pushing him and turned back to my friend.

Apparently he wanted me to talk to him too.

But when I turned to him, I saw, instead, a new face by the last remaining swing.

“Push me too!” the new guy said, holding up his arms.

I didn’t even ask him about his adults.  I just put him in the swing.

And they did, in fact, want me to talk with them.  We talked about why living in a pineapple on the bottom of the sea might be uncomfortable, how big sharks get, and a few other important items I have since forgotten.

When the babysitter came to retrieve Boy 1 and the mom (or was she an aunt?) came to get Boy 2, I smiled.  They smiled back, and didn’t seem to mind at all that some strange woman was pushing a blonde girl and their boys.  In fact, they thanked me.

I can’t help but laugh.  Never once did I ever picture myself as that mom.  You know, the one with the gaggle of kids around her, some of them hers but most of them not.  I never thought of myself as a magnet for people under age five or as attractive to the preschool set.

That day, at the playground, I had a glimpse, once again, at the many ways the gift of motherhood has made me a better person.

Next time, I only hope that I’m on swing duty so I can have some more of those enticing conversations!

For anyone who’s interested, that photo is circa 2008, when I had only two girls and we still lived in an old farmhouse. In fact, that day on the playground, I only had two girls, too.

Tribute to a Sailor

From the Man of the House