Beginning of the Week Daybook

Outside my window
It’s daylight! At 7:30! Except…it’s really 8:30. (Can’t fool me, Mr. Time Change Man!)
~~~
In my thoughts
The election (though I grow oh. so. weary of it)
The memories I need to capture by writing (Babby’s store, notably)
~~~
In thanksgiving
For a weekend well-spent.
~~~
Kitchen meanderings
Cooking four times a week is plenty, lest we drown in leftovers. I now have documented proof. And the idea of a menu planning party…it’s planted firmly in my head and I am already figuring out who I would invite. (Never mind that some of y’all live in Texas, others in Virginia, still others in North/South Carolina, Michigan, California…it’s my dream world, let me enjoy it!)
~~~
Using my creative powers
Christmas presents: lists need made, resources need brought together, energy needs tapped.
Home organization: clothes need packed away, clothes need dug out of attic.
~~~
Going places
We have two nights of fun-with-friends planned in the coming week (OK, so they’re weekend days, but still!).
~~~
Nose inserted
Mouth Wide Open, by John Thorne
Mary and Me, by Ginny Moyer
Parents and Children, by Charlotte Mason
The newest issue of Faith and Family (it’s finally at the top of the priority pile)
~~~
Special intentions
The newest member of the Foss family, Sarah Anne
Those who are expecting babies (especially those in my family)
~~~
In my ears
I am within four episodes of being caught up with the Secrets of Harry Potter podcast. I might get it all caught up this week…and then, my mission will be to burn all the episodes to a CD (or perhaps a thumb drive?) for Prince Charming to listen to at work.
~~~
Around the house
Baby’s getting all of big sis’s shoes out of the box, working out just how they fit on her feet (after she gives them a quick chaw, that is, and I tell her “no,” she shakes her head, and goes right back to it); Big Sis is upstairs sleeping (in my bed…and all I have to say is at least she’s asleep!)
~~~
Movin’ and shakin’
Good news: I increased my number of steps. Bad news: not by the (rather piddly, I thought) amount I intended to. Goal this week: 8532 steps a day (average). The only way to get movin’ is to get off my duff!
~~~
A favorite thing
Caddyshack.
On a Saturday night.
Both of us on the couch, kids in bed.
Instead of football.
(Let’s not talk about the awesome game we missed. OK?)
~~~
For the rest of the week
It’s a slow week, by comparison to some of the others recently. I’ll take that. And I’ll try to get cracking on a couple of those projects (notably the “figuring out Christmas” one!) that can use some effort.
~~~
Worth a thousand words 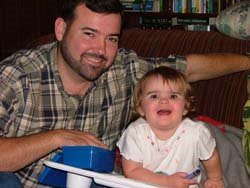 From about two years ago exactly. Isn’t he something? Isn’t she small? (Her little sister is not quite that big now…but wasn’t even a glimmer when this picture was snapped!)

Should NFP Be Easy? {Mom to Mom}

3 Good Ways to Go to Extremes