How do beliefs inform your parenting? {An Atheist and a Catholic}

Well, here we are, back again after a brief hiatus (which was totally my fault). 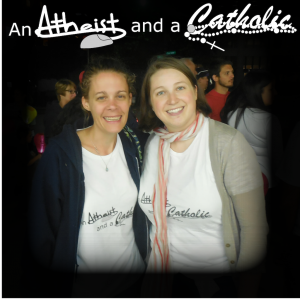 Brittany on how beliefs inform her parenting:

As someone who doesn’t believe in the universe balancing things out or in an afterlife, it’s up to people to make things fair. When you don’t believe that suffering is rewarded in the next life or that criminals will get punished, there’s a lot more impetus on doing good deeds. Of course, as a parent of a toddler, my beliefs are influencing my plans more than my practices, but I’ve done a pretty good job so far of following through on my intentions.

One way that my beliefs manifest in my parenting plans is emphasizing charity. My son isn’t old enough yet, but I’m hoping to bring him along to service events as a participant (instead of as a spectator), encourage him to give away possessions he doesn’t need or use, and incorporate charity into parties. I started with his first birthday party, which raised $150 for cancer research on behalf of his great grandmother, who passed away from leukemia while his dad was still a kid himself.

Another implication is fairness. Life isn’t fair, but people can be. I expect my kids to share, take turns, and be thankful. I hope that they’ll be prosocial: cooperative, selfless, and compassionate. The flipside of fairness that makes it fairness, not meekness, is that I will encourage them to stand up for themselves and others. Even if that means defying authorities or getting into an argument. Even if it means arguing with me.

I only have one child, but we already disagree occasionally, and that’s fine. I don’t expect blind obedience. Right now, Thomas doesn’t have a ton of ways to communicate. Sometimes he resorts to screeching or hitting. I don’t reward that, especially the hitting/pinching, but I do see it as communication, and not disobedience. When he’s a grade schooler, we’ll no doubt discuss activities and foods that are appropriate for him. When he’s a teenager, we’ll be negotiating curfews, responsibilities, and privileges. Being a nonbeliever, and a freethinker, means tolerating disagreements and responding rationally. I’ll teach him to be critical of arguments, but not of people.

I didn’t think about my beliefs informing my parenting until Brittany proposed this topic. And, honestly, I battled just throwing up my hands and giving up before I even started.

And that might tell you a lot about how my beliefs inform my parenting, huh? I’m a quitter by nature. I would rather just stop while I’m ahead, write off what I’ve lost and call it good, and go.

In other words, I’m the ultimate slacker.

And yet, there is hope. For me and for my children and even for my family.

How do I know this?

Because I haven’t quit yet.

And I haven’t quit yet because of my faith, because of the assurance that there is more to existence than just the black hole that is in my own head.

For me, there is no good answer to “Why?” without my faith. I can’t look at my children and say that sharing is good for the greater humanity and yet still be bad for them. I can’t explain a longer viewpoint beyond myself.

My faith has also informed my ability to reconcile the fact that people are not logical and rational, that they have the pesky passions and then the will. And those two—passion and will—are insurmountable to me without my faith.

Read all the posts in the An Atheist and a Catholic series here.

Mary as a Model of Gratitude

You can take the girl out of the country…

The Baby Jesus: a Reflection