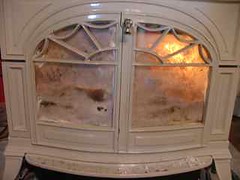 We had a really rough night.

Not with the weather, mind you: with the girls. They pulled a Tag Team Special, in which one of them and one of us were up, we think for the whole night (after a while, we just sort of lost track, and then, suddenly, there was light).

So when I woke up to this… 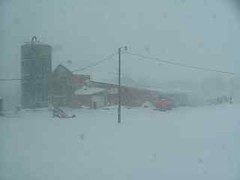 …I had some snorting laughter.

You see, dear reader, I am a scoffer. I scoff at the weather experts who call for 20 inches of snow, because they’re wrong more than they’re right. We have a saying around here.

“Want to see a change in the weather?” we ask each other. “Wait five minutes…” pause for effect (though we all know what’s coming)… “It’s OHIO!” 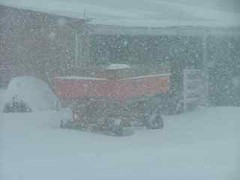 Five minutes later, it was still snowing. Imagine my shock. 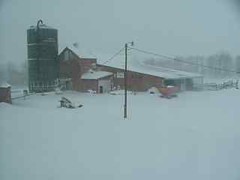 This was taken a few hours later, during a little respite. Those of you who have seen my beautiful barn minus the 16 or so inches of snow (maybe there were only 10 when I took this) can, perhaps, appreciate the piling. 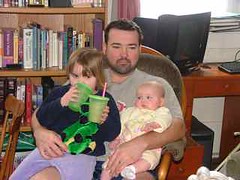 As for us, we snuggled down. Daddy Charming cuddled under two pint-size girls, one of whom is two-fisting and the other of whom is wondering what the two-fisted one is up to. 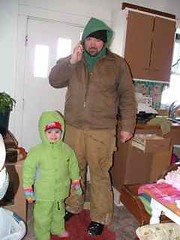 All that snow had to go somewhere. I mean, we only stand for being stranded for so long, and two days is quite enough (this hilarity started Friday mid-morning). So Daddy proved to be quite as charming as I’ve always said he is, and he took Miss Muffet (here disguised as a “tick that’s about to pop”) with him on Plowing Adventure Numero Dos. (There were three, for any of you who are interested.) 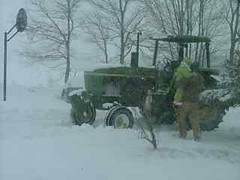 See that? That’s our tractor. (Nothing runs like a Deere, which is worthy of its own post.) I would venture to name our tractor, but Prince Charming (who, for the purpose of this part of the post, will be Farmer Bob) would likely kick me out or take my laptop away. But it’s a tractor with character, I tell you. 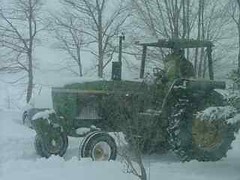 They’re off! My driveway once more exists (for a short time only), thanks to a plethora of green effort! 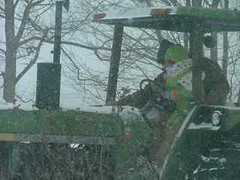 There they are, nestled up in the cab of our Deere (maybe I’ll call it Mr. Deere – no, I’d better not, the risk is just too great). I heard tell that Daddy Farmer Bob let Farmgirl Muffet steer (related to me as “driving,” which I have to just assume is incorrect – and if it’s not, I don’t need corrected, OK?). 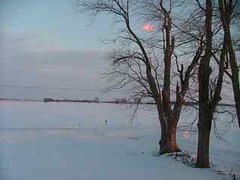 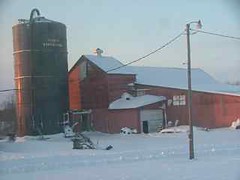 So we’re left with a postcard picture out of our living room window and the prospect of snow angels and getting out tomorrow (even if it’s to the end of the driveway to take pictures from outside the house!).

Just What EVERY Backyard Needs

Life on the Outside