Chosen: A Confirmation Program Worth Checking Out

As a Confirmation catechist and program leader, I am ALWAYS looking for great resources. With our Confirmation Boot Camp program, we have never found anything that works completely and totally. We have a program we use, sort of, but it comes down to a team approach of tapping into resources, pulling together what this year’s candidates are asking about in their interviews, and letting the Holy Spirit work through us.

Even so, knowing that there’s probably no program that will meet all the unique needs of our program, I took some time to sit down with Ascension Press’s new Chosen Confirmation Program.

It is, in a word, incredible. While I don’t see it as something my parish will (or can) use straight out of the box, I do think it has a place with many parishes and programs. It’s essentially a toolbox, and it’s well-done.

And, that said, I expect we’ll be using parts of the resources this summer during our Confirmation Boot Camp. More about that in a bit.

Chosen includes 8 DVDs that are nothing less than awesomely produced, a leader’s guide, student guides, and (I love this!) parent AND sponsor guides (one for each). There are total 24 lessons.

Not sure what to include in your Confirmation program? Feeling like you should have something more but not sure what? This is a package that’s complete. All-in-one.

That about says it all. Professional. Beautiful. Worthy of spending money on.

The videos are useable in a variety of ways.

Admittedly, we won’t be using the entire program as it is. Each lesson’s video, though around 50 minutes total, is segmented into 15-20 minute chunks. Which is about what I think is a do-able time frame for this age group and something that will work into how we put our week-long program together.

If I want to share Leah Darrow’s story, from her own mouth, I can. And it’s not a YouTube video that won’t play right when the WiFi’s down.

There are also Review Game options before each lesson so you can tap into the previous lesson (if you’re using it as-is).

I’d like to see something like this for adults. (Oh wait, there probably is and I’m just viewing all THESE videos and thinking about how many of the parents I know don’t know this stuff…) Honestly, though, I think some of these videos could be used as they are with adults. They’re not talking down to teens. They’re treating teens like the intelligent individuals they are. 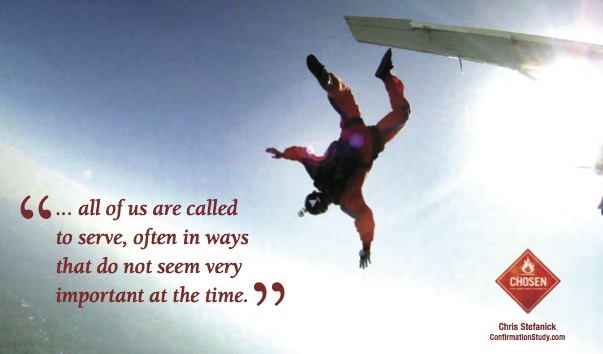 It taps into real people and real stories.

This isn’t just one person pontificating. Between all the videos and the information in the guides, there are probably no less than 50 people involved. There’s filming around the world, including Times Square and St. Peter’s Square.

It took five years of planning and consultation to put this program together, and you can tell. I haven’t seen anything else like this.

The guides are beautiful and packed full of information.

They are scannable, with semi-gloss full-color pages and a magazine layout. Looking at these guides, I can only admire them. They’re full of really IMPORTANT information, designed to play off of the video segments and get students thinking on their own.

But am I the only one who despairs that the world reads both more and less than ever? That you can send an email with a short bulleted list and take five phone calls a week later indicating that no one read that important message?

I tend to not like workbooks or handouts (finding them on the floor and in the trash afterward has made me slightly cynical), but that is probably just my style. And it’s probably reflective, too, of the one-week boot camp style we use, as opposed to the 24-week  minimum approach pretty much everyone else takes.

THAT said, the leader’s guide can be stand-alone, even without a bunch of reading aloud (which goes over about like a lead balloon). It’s as beautiful as the student’s guide (THANK YOU, I say, THANK YOU) and the call-outs are brightly colored and look like they would be easy to use in an actual class setting. 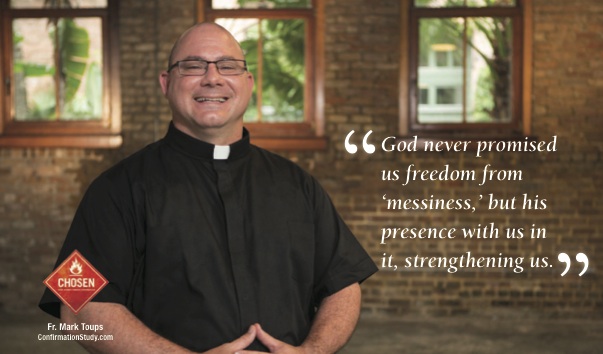 The parent’s and sponsor’s guides are a great idea.

And yet, I find that, just like the teens, so many adults also long for this “filling” that can be found only through God. They want to, but they sometimes need to be shown how.

I have no doubt that a certain percentage of these beautiful guides will end up in recycling bins. But if a handful are used with each Confirmation class, does that justify the cost? To the idealist in me, yes. Absolutely!

The parent’s guide includes an introduction to Confirmation, a section on preparing the child for Confirmation, and information about choosing a sponsor. There are also conversation starters for every lesson. And, get this, a section called “Top Ten Catholic Questions” and then a section of additional resources.

The sponsor’s guide also has an introduction to Confirmation and the role of a sponsor. The section “Four Important Conversations to Have with Your Candidate” is one that I’m pretty much going to reread constantly. This guide has the same “Top Ten Catholic Questions” and additional resources sections that the parent’s guide has. 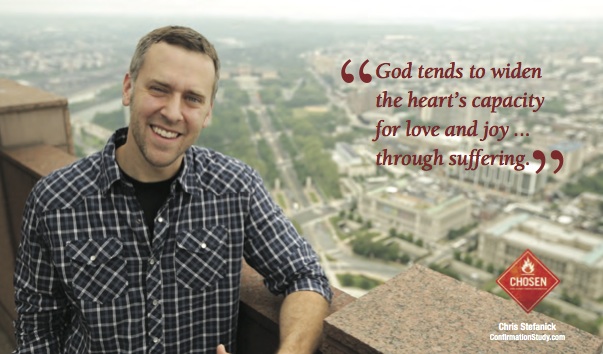 While I haven’t yet watched all eight DVDs and 24 lessons of information, I am going to. Because apparently I am not mature enough yet to be beyond this stuff. (Dare I suggest that this is appropriate for adults too? Maybe just adults like me…)