Someone told me just today, “There are two things I can put off with unfailing success: confession and exercise.” She was speaking straight to my experience, let me tell you! You see, for the first time in I-can’t-remember, I can say, with a wide smile, that I have been to confession. Why did I delay? I work with a priest, so there’s no good excuse there! I understand all the reasons for frequent confession. No, the Church doesn’t require it. But let me tell you, my life does! And yet…and yet, it’s been more in theory than in practice for me. “Well, I haven’t killed anyone,” that little voice will reassure me (the voice with the whiny tone to it, and the one that so often gives me bad advice, now that I think about it). And none of the other voices can come up with a good argument, except, that is, the brave voice (which sounds a lot like my Gran), that will unfailingly say, “Yes, but will it hurt anything to go to confession? If you’re only going to feel better, why do you even hesitate?”

The reasons for hesitating and delaying are numerous. We all have them. There’s only one person I know who doesn’t so much struggle with this, and I’m friends with her mom. Her mom is, in fact, the one who has given me the Confession Pep Talks of late. And she’s the one I called after going to confession, because I just had to share the joy with someone.

You see, after unburdening myself of all of that STUFF, I found myself able to move again, able to breathe in my own skin again, able to live with myself. Where else can you get complete absolution? The embarrassment (a sin of pride, Wise Friend reminded me) of saying some of those things out loud, of admitting to my weakness…small price indeed for this relief and cleanliness I feel. This is better than a hot shower after a week in the woods, than the smell of freshly cut grass, than even the affection of a small child. This is relief at the highest levels, and letting go in a way the people who have always advised me to “get over it” should really give a try.

The really embarrassing thing, though, is that I know better. This wasn’t my first confession by a long shot, or even my second. No, I’ve been Catholic long enough to know better. Or have I? Father told me that Satan (and his little tempting buddies) is no fool about keeping us away from the confessional. Of course, I’ve heard that before: I read Scott Hahn’s Lord Have Mercy two years ago after Father plugged it from the pulpit (it had been sitting on my to read shelf for far too long before that). No, I’m no stranger to the good that comes from confession, and frequent confession at that. I should know better.

And isn’t that always the way?

I probably won’t have any success in getting an exercise regimen going anytime soon…thankfully, I have a toddler to keep me cracking a little! 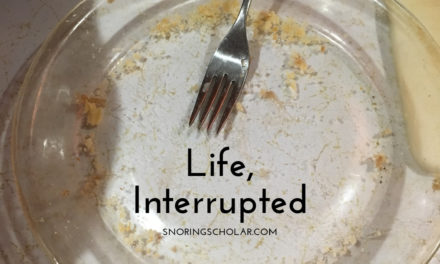