Kitchen Madonna has planted an image in my head, a metaphor for my daughter, that I can’t stop thinking about. I was dreaming about it last night. (I don’t know if she intended it that way or if there really is such a thing as a corduroy dust mop.)

My daughter doesn’t wear much corduroy, really, but I want to get her more after reading the recipe for making chocolate muffins on the kitchen floor.

The phrase “corduroy dust mop” makes me smile, every time I say it in my head. It makes me feel better about my large-plank old-fashioned not-as-clean-as-they-should-be wood floors, because dust mops just don’t have the same charm on carpet. It makes me think of how my daughter used to crawl and explore, not so very long ago, and how, once she’s worn it, it’s off to the laundry. Even though she’s upright (when she’s not falling, that is), she still has a way of attracting all the dirt to her pants, especially her pants.

There’s something in this phrase that makes me think of Grandma, and I really must remember to share it with her. I can hear her chuckling in my head; I can also hear the hint of tears as she smiles over the phone. Something about having a great-granddaughter brings the tears out more often, or so that I notice them more.

“Corduroy dust mop” makes me think of the kitchen table, because as I stand there preparing dinner, often I have a helper. Oh, sometimes she’ll wander off into the other rooms, where her toys are strewn and the dog’s curled up. Often, though, she’s right there, wanting her own bowl, wanting to see what’s in my bowl.

I think of standing at the kitchen sink, being my own dishwasher (ah, the joys of this old house!), and having a young assistant, one who has not gotten bored with the joys of water and the physics of pouring. I think of the silence when she’s asleep, and the fullness of it. We’re just paused in our activities, and that’s a good feeling. I have thought often of how short this time is, when we are her world. Like Gran, I get tears in my eyes when I think about myself in that role, having my daughter come home to me with a baby (but maybe, I remind myself, marriage will not be her vocation).

My “corduroy dust mop” will grow up before I can blink properly. I hope that I will stop often enough to savor the feeling, so that I can remember the joy and laughter. I hope I keep perspective, so that I can ignore the momentary frustrations, the worries that accompany parenthood, the overwhelming nature of what we’ve taken on.

For now, I’m going to work on perfecting my recipe for chocolate muffins on the kitchen floor. 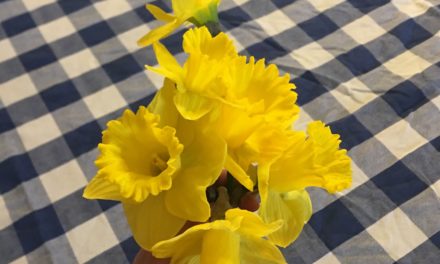 Good Friday at the foot of the Cross

If a white Christmas is what we’re after…