Curling up with Mary as Our Lady of Loreto 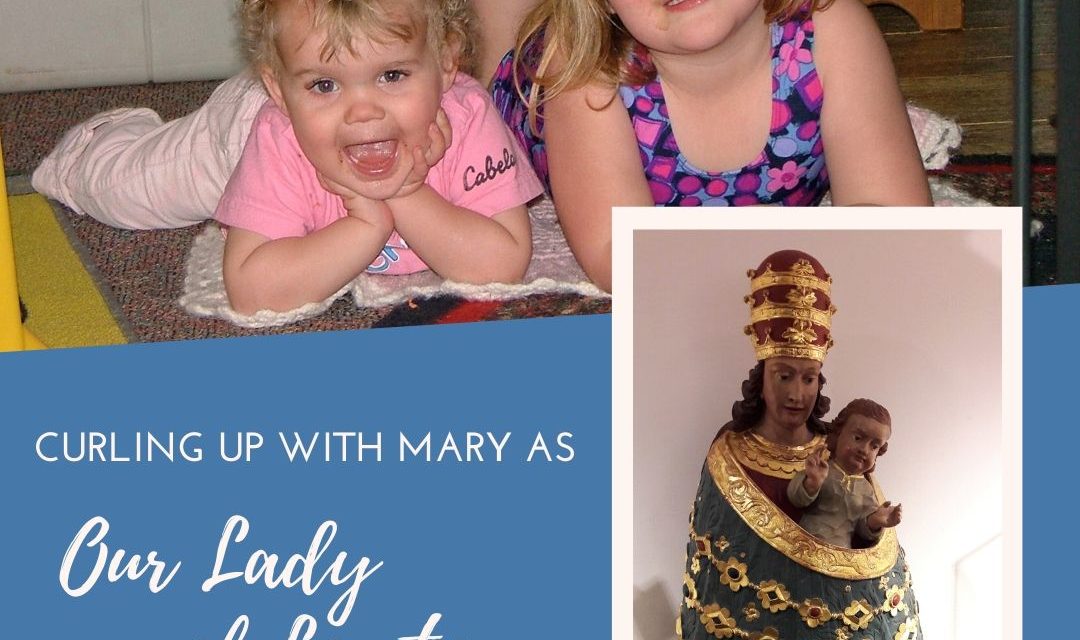 I wrote this back in 2009, when I had a four-year-old and a two-year-old. I came across it recently and thought I’d share it with you here. Enjoy and happy feast day of Our Lady of Loreto!

There’s nothing like a good story. In my current state of motherhood, with young children in tow and a life that moves at the stop-and-start speed of diaper changes and involves a juggling act between professional and personal, the good stories I find myself curling up and enjoying are often within the pages of my daughters’ bedtime stories. We’ll snuggle together, and sometimes my four-year-old will chime in with the parts she knows.

We seem to come back to our favorites. Oh, I sneak new ones in on her, going to the library myself and putting books in the basket, and sometimes that introduces new favorites to our rotation. But, especially when we’ve had a rough day — in actuality or just mentally — it is the old familiars that crop up in our hands.

There’s comfort in the things we’re used to, the patterns and routines that are familiar. This isn’t just true for my children; on the mornings when I wake up without the usual peace a night of sleep brings, I turn first to the old familiar prayers, the ones that calm me and soothe me. At the end of the day, finding myself exhausted or stressed, it’s rare that I’ll try something new. No, I’ll go for the equivalent of my favorite story, whether it’s a hunk of chocolate or salt water taffy or a cozy book or the arms of my husband.

The story of Our Lady of Loreto is one of mystery and intrigue. It goes as well with a snuggle on the couch or a chunk of your favorite sweet.

During the end of the thirteenth century, the Holy Land was lost to Christians. The holy places were getting sacked and desecrated by the non-Christians. When the Christians left, defeated, in 1291, the holiest of houses, the one that housed Jesus, Mary, and Joseph, was left unprotected. It was a tiny clay house, made of mud and straw, but somehow preserved throughout the centuries and venerated by the faithful. The emperor Constantine had built a basilica over it in 312, and it had survived pillaging in 1090. However, things weren’t looking good in 1291. The situation seemed to equal certain ruin for the holy house.

During the night of May 10, 1291, a group of shepherds in Tersatto, in what is now Croatia, went out to tend their flocks. Suddenly, there was a little building in their midst! The shepherds, who must have questioned their sanity as they inspected it, reported later that the walls did not evenly touch the ground — it was hovering, in fact. It was a tiny structure, more like a church, despite its size and humble appearance, than a dwelling. When they entered it, they smelled incense, and they found an altar and a beautiful statue of Mary, along with a crucifix.

It didn’t take long for the shepherds to rush and wake the local parish priest, Father Alexander Georgevich, and report their findings. The priest, baffled and unable to offer an explanation to the crowd that assembled as he was inspecting the building, spent hours in prayer, asking the Virgin Mary for insight. In his sleep, Mary appeared and offered him the answers he sought and proof for the doubters. She told him that the humble little building was, in fact, the house where she was born and brought up, the dwelling where she conceived Jesus at the Annunciation, the home where Jesus, Mary, and Joseph lived. And then, as evidence, she cured him of the arthritis which had crippled him for years.

What kind of joy do you think Father Georgevich showed the next day, sharing the story and likely jumping around a bit in his newly restored physical state? I can picture him smiling broadly, telling the story that must have seemed just a bit over the edge of reality, and then letting it all loose and doing a few cartwheels.

The peasants of Tersatto must have been thrilled. They venerated the house as the relic and reminder of holiness that it was.

The Holy House, it seemed, would be safe from the marauders of the Holy Land.

And then, on December 10, 1294, the shepherds of Tersatto, noticed something strange — the little house was being borne away by angels! Across the Adriatic Sea, those who happened to be out and about in the middle of the night hurried home to report the sight of a little house passing overhead. Indeed, it made such an impression to the area that even now, the people of Tersatto and in the Italian Marche region rise at 3 AM on December 10 to light bonfires, ring bells, and sing litanies of praise to Mary.

The holy house landed in a little plain called Banderuolo, in Italy, four miles from the city of Lecanati. The inhabitants knew almost immediately of its arrival and pilgrimages started. It gained a reputation as a place of healing and cures.

Unfortunately, as pilgrims were attracted in the thousands, so were the less savory thieves and bandits. They lurked in the surrounding forest and eventually transformed the place of healing into a place of fear.

It must have been no surprise when the house was once again carried away by angels. It settled on the property of the Antici brothers, in Lecanati. It didn’t stay there long either, though, because the two brothers who owned the adjacent properties began to fight. Though tradition calls it a quarrel, it must have escalated to such a degree that the angels, once again, took the house to a different location.

The angels left the holy house at its present-day location, on Loreto hill, a few miles from the brothers’ property. People might not have known the exact story behind the clay structure, but there was no doubt that it was holy. After the Virgin Mary revealed the identity of the house to a hermit nearby, the government of Lecanti sent 16 respectable citizens to the Holy Land to investigate the situation.

They found the spot in Nazareth still venerated, empty except for a foundation. The foundation would have fit the little house in Loreto perfectly, and the investigators saw that the bricks in Nazareth were similar to the building on their hill in Italy, so different from the building materials in that part of the world. The Lecanti representatives were convinced that they were hosts to the Holy Family’s house.

The humble little house on Loreto hill has become one of the greatest Marian shrines in the world. In 1669, it was given its own Mass in the Missal, and one of the five litanies approved for the public to recite is called the Litany of Loreto.

If you visit, you won’t see a simple clay structure, though. In 1469, a large basilica was built over the holy house, and in 1507, a marble enclosure was constructed around the house within the basilica.

Mary’s role, throughout salvation history, has often been one of comfort. The list of titles that have been given to her is endless, but each one is targeted to a slightly different group of people, and it is in this diversity that I see Mary’s universal appeal. But, though Our Lady of Loreto might be a title that means more to the people of Italy, I find myself drawn to it all the same. Despite the specifics that tie her to a certain province in Italy, I find that the underlying Mary is the same.

It’s just like our favorite storybooks at night. We curl up to Mary, we reach out with grasping arms, we sink into her lap, and, whatever the title, wherever the apparition, however the story goes, the familiar Mary, the mother we know and love, is there all the same.