Outside my window: Still dark.

Room to ramble: I’m trying to think of this as a week of opportunity, instead of a week I feel like I’m starting with my hands tied behind my back and the deck stacked against me.

In thanksgiving: For flexibility, though I’m not good at it.

Kitchen meanderings: Good thing the menu was planned last week in a strange spurt of planning two weeks of meals in a row. That kitchen project I’m working on this month? Well, don’t ask about it. The floor’s crunchy and the sink has been scrubbed — again — and the water is soft for the first time in two or three weeks. FlyLady doesn’t live in an old farmhouse, I’m quite sure!

Nose inserted: In all the same books as last week…guessing there won’t be any new starts this week, the way things look.

Folded hands, bowed head: For all the intentions in my newly-organized prayer journal (thanks for the tips, Julie!) and for peace in the midst of what looks to be either crazy productivity expectations or many dropped balls this week.

In my ears: A hodge-podge of podcasts I’m catching up on, and a lot of chant. Late last week, the mailman brought Kitty Cleveland‘s new CD, and I’m hooked. The podcasts might just have to wait while I soak it in some more.

Around the house: Elizabeth, up with me at 5 AM (*groan*), in the living room watching TV and doing very well with my admonition that when we’re up this early it is QUIET TIME. Me, in the office at my desk, in denial about the bulletin that should have been done on Thursday or Friday or over the weekend, but which couldn’t be because of other things, and thinking about the invites that need printed and the labels to go with them and the moving project and and and and… The washing machine is happy on the other end of the house…it’s been silent for nearly two weeks and I plan to give it quite a workout this week.

A favorite thing: Lisa Hendey’s Catholic Moments podcast (which is where I heard about Kitty Cleveland and her new CD). I’ve gotten to know Lisa a little bit over the last six months, and I can tell you, she really is just as nice as she sounds. No, really! You’ll find her at Faith & Family Live! and CatholicMom.com and Today’s Catholic Woman (and probably some other places too!). But don’t miss her podcast, whether you listen online or subscribe in iTunes. She gives you geeky tips (which I just love) and encouragement (which I really need) and she interviews people I have often never heard of but who I then become big fans of (such as Kitty Cleveland).

For the rest of the week: Let’s just say “a week of much” and leave it at that, lest my breathing rate increase more than my ability to stay conscious. 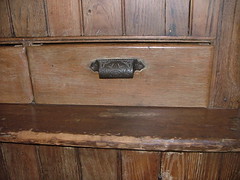 Looks innocuous, innocent, unimportant. But without this drawer’s contents, my mornings would be less peaceful and my days would be less organized: it’s where my devotional materials are kept.

The Daybook of White