I used to read a lot of horror, especially Stephen King. I was talking to someone a few weeks ago, someone who has known me for years, and they asked me about the latest Stephen King novel.

I didn’t even know what it was. It made me stop and think about how long it’s been since I’ve read anything in that genre. The answer: a while. A lonnnnng while.

If I wasn’t such a fangirl of Karina Fabian, I probably would have passed on reading Frightliner, a collection of three stories–one by Colleen Drippe’ and two by Karina Fabian. It also includes a chapter of Neeta Lyffe: Zombie Exterminator. (I’ll be reviewing that later this week and it is so delightful as to make me read more about zombies. But I digress.)

Once again, as I mentioned in #5 a few weeks ago, I am considering how I’ve limited myself in the speculative fiction area. When it’s “sci fi,” I run because I don’t really like aliens. When it’s “fantasy,” I roll my eyes. When it’s “horror,” I cower, because though I will enjoy it at the time, it will haunt me in ways ugly and unforgettable later. I don’t dispute that there’s a place for these genres, and wow, when they’re done well, all the stereotypes I’ve made in my mind for them shatter, leaving me with what I love the most: a good yarn.

That’s what Frightliner is–a couple of good yarns–and that’s why I’ll be tucking it away to reread. It’s not long, which is why I read it in one night. That, and it was gripping, compelling, and intriguing.

The title comes from the first of the stories, written by Karina and imbued with elements that I can only call Catholic and delightful. I know how ridiculous it sounds to refer to a story that’s full of suspense and vampires as delightful, but…well, it was. I kept waiting to have to put my iPad down, but I didn’t have to. And there were no nightmares later.

(Bit of a spoiler alert coming, though this is pretty vague.)

But the way it’s done makes me long for more italics in my post, and maybe even some all-caps. It’s great.

The next story in the book is “The Lobby,” by Colleen, and to call it chilling is to be a bit understated. It requires the reader to think, and wow, I so love that. I’m still thinking about it. Good stuff.

The stories wrap up with “Accidental Undeath,” and is it just me or could this be slightly changed and be oh-so-relevant today? I hate writing with spoilers, so I won’t say much. This is a story that flirts with “what if?” and “how would you handle it?” in a way that feels not-so-fictional.

My one line summary: I loved it. Buy it, read it, let me know what you think of it. Highly, HIGHLY recommended. 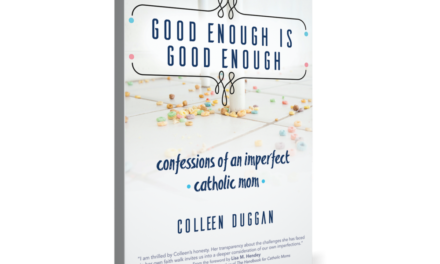 Good Enough Is Good Enough: A Book EVERY MOM Should Read