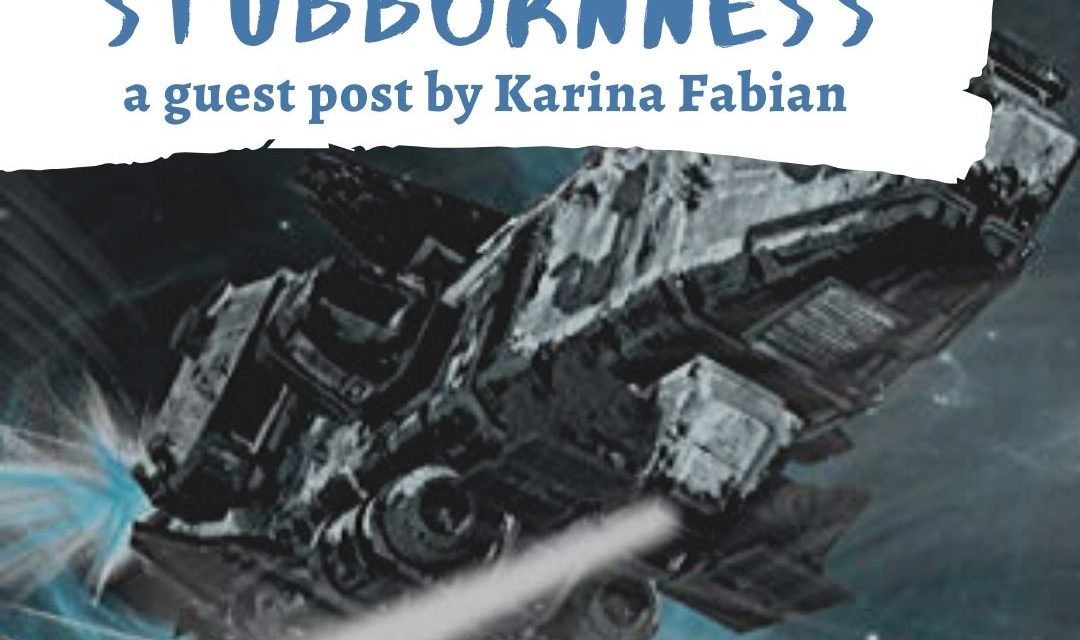 Today, I welcome back Karina Fabian with a guest post in celebration of her new release, The Old Man and the Void. Written in the spirit of Hemingway’s The Old Man and the Sea, it carries the man-against-his-environment theme into the space opera genre. There’s an excerpt at the end of this post, to whet your appetite.

You can find Karina and her work at KarinaFabian.com, and she’s on all the social media you’d expect. 😉 Karina writes from Florida, and in addition to the serious work that pays the bills, she’s written a number of wonderful and highly entertaining science fiction and fantasy novels that have won me over to the genres. My favorites, hands-down, are the science fiction parodies she’s written. Nuns in space? Yep. A dragon who channels his inner detective and is working his way out of purgatorial living? Also yes. Seriously. Go. Read. Her. Stuff.

The Old Man and the Sea by Ernest Hemingway is a classic man vs. nature story. Santiago is an aging fisherman who has been down on his luck. When he captures a marlin, the biggest ever seen, it carries him out to sea. There he fights ocean and sharks to return home with his prize. In the end, he comes back a failure – or does he? As tourists see the bones of the fish, they admire the courage of the one who brought it in.

The Old Man and the Void puts Hemingway’s Pulitzer-prize-winning novella into the space opera genre. Dex Hollister is an aging relic hunter also down on his luck. Then he snags the catch of the century, an alien warship from a lost civilization. The ship, however, powers up and drags him across the event horizon of a black hole. There, he and his ship (the Santiago), fight not only the turbulent forces of the black hole but also the automated ships of two civilizations still at war.

I wrote The Old Man and the Void on a challenge from my husband to adapt Hemingway’s book into science fiction. Rob enjoyed the novella. I have to admit, I mostly saw it as a big fish story. I spent a lot of time urging Santiago to just let go and go home!

What would drive a man to cling so stubbornly to such a doomed and dangerous undertaking?

While I used The Old Man and the Sea as the outline for my book, it was really that question which inspired me. My character, Dex, also would not let go, even though his ship’s AI (whom I named Santiago) urged him to do so.

As the battle against ship and space unfolded, Dex also shared with me his inner battles – the grief for his long-dead wife, the struggle not to give in to a form of space-time dementia that put him and the ship at risk. He also shared his past and how the influences of his father, the support of his wife, and his own arrogant ambitions brought him to this place – the battleground of an ancient civilization. In chronicling his past and present, I came to understand what made him The Old Man.

I never got such insight into Hemingway’s Santiago. Now and again, I wonder why, that day of all days, he said, “I will cling to this catch and bring it home or die trying – but I will not die without a fight.” Like Santiago, Dex lives, but his life changes forever. (Stay tuned for Dex’s Way, coming this autumn.)

Did Hemingway’s Santiago come home to a changed life? Did either make the right decision? Let us know what you think in the comments.

Excerpt from The Old Man and the Void

He was lying on the floor of the hallway, twisted into a fetal position facing the control room. The floor felt warm in spots. Why would it be warm?

He blinked, the scene resolving into a partial focus. The emergency lights cast a dim glow on the blue haze, accented by the occasional strobing of the regular lights or the spark of a console. Everything smelled of ozone and melting plastic. Loose equipment scattered across the floor; his roller chair had wedged itself under the console. He tilted his head up enough to see the console itself; torn wires poked out of the casings, as if the console had been torn in two, then the pieces shoved roughly yet perfectly back together.

“Scarlet!” Heart thundering, he took a breath to call louder, but smoke filled his lungs. Sometime during his coughing fit, he remembered that Scarlet had died years ago. Ten? Twenty? Didn’t matter. It was just him and…and…

“Santiago?” The ship’s name came back with difficulty, but once he had that, the rest of his memories flooded into place. “Santiago, report.”

Only silence and the buzz of static replied.

He forced himself up, slowly, stopping when he could sit with his head resting on his hands. Even that effort had cost him, and he waited for the dizziness to pass before calling the ship again. When Santiago didn’t reply, he crawled to the adjunct control panel and took out remote control equipment. He adjusted the cap on his head, settled the fingers of the control gloves more firmly into place, and called up the back-up system. He found it functioning and puffed out a sigh of relief. Nonetheless, the outside sensor readings displayed wild, twisted lines of light and energy interspersed with long moments of static or complete blankness. Nonsense.

He turned his attention to the capture beam and laughed when he found their prey still on the other end, surging ahead, pulling them along.

All of that! You nearly killed us, but you’re still mine! His laughter set him coughing, but the air in the cabin had started to clear.

Dex set the backup program to run diagnostics and repair on the Santiago and pulled off the controls, leaving them hanging from the wall where he could grab them quickly. Then, he bullied his body to stand. His legs ached and his knees felt like jelly; he leaned heavily against the wall as he staggered to the bathroom.

The tepid water felt wonderful on his face and neck, and he splashed himself several times before he noticed how bright the small bathroom was. His eyes flicked to the window, and his body followed until he stood, nose pressed against the glass, awestruck at what he saw.

A thin veneer of blue rays marked the event horizon. Below the horizon, he saw undulating waves of blackish red light fighting to break free of gravitational pull. Above the horizon, curious bows of light streaked yellow and orange.

His breath accelerated as he realized where they were. His memories of the last few minutes before the accident returned. They’d crossed the event horizon. They were inside the black hole!

A Smile and the Rosary

A Nugget of Parenting Wisdom