Finding Myself in His Sacred Heart 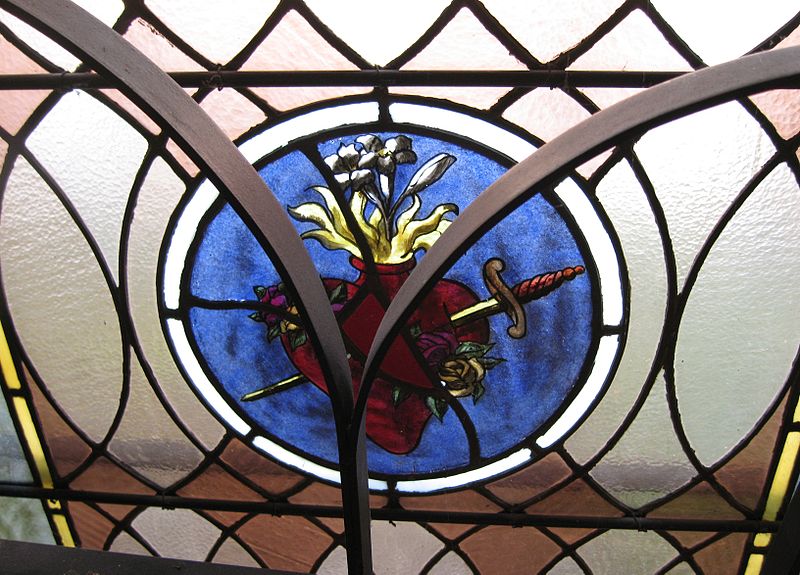 When the boyfriend who would become my husband told me he couldn’t go on a hiking date because he had to go to Mass, he pretty much guaranteed I’d be going with him sometime soon.

I mean, how could he put me off for church? How could he resist the chance to be around me when things were going so well with our relationship? What did church have that I did not?

I remember the sunlight streaming through the windows of the church that first Mass, weeks later, that I went to with him and his family. I remember the reflection off the wood floor, the scuffing sound of the kneelers against the pews.

It was the very picture of a country church: tiny enough to feel crowded with fifty people, wood-framed, glorious in its simplicity.  There were plenty of secret cubbyholes and stashing places, and even a vestibule and a sacristy, both approximately the size of postage stamps.  The stained glass windows seemed to glow during those Sunday morning Masses.

Sacred Heart Church in Milford Center was built by the sweat of the folks in the countryside who felt strongly enough to put their muscles to the test.  Looking around it, at the wood floors and the careful painted details, I could see proof of someone else’s love for a building, and I remember that I’m not alone or crazy for feeling such a pull for a place.

In a strange nook in the ceiling at Sacred Heart Church, there was a stained glass window that I always assumed was the Sacred Heart of Jesus.  It captured my attention, because it seemed weird.  It was unlike anything I had ever seen.  There was a crown over the heart, with thorns around it.  In the daylight, it seemed to glow.

As it turns out, the window was supposed to be of the Sacred Heart of Jesus.  I learned, by virtue of working with the parish priest and hearing the lore of the parish, that the wrong window was shipped all those years ago.  The window that was shipped was of the Immaculate Heart of Mary.  It was installed and beyond easy replacement when someone must have looked up and pointed out the difference.

I wonder if they laughed then as we do now when we share the story.  There’s comedy, after all.  But there’s also something so appropriate about having Mary’s Immaculate Heart looking down from that pinnacle in the roof, in a church named Sacred Heart.

The window was salvaged when Sacred Heart was torn down and it’s now part of a beautiful display in our Parish Activity Center, where dedicated parishioners transformed regular windows into a work of art using that window and many others.

When I see that window, I remember where my Catholic journey began. It also reminds me that, as alien as the image of the Sacred Heart has always been to me, I need only to rely on his mother—and mine—to lead me to Jesus.

The image of the Sacred Heart, so beloved by dear Catholics in my life, was something I looked at with a bit of confusion until recently. It seemed wrong, somehow. It didn’t speak to me and it didn’t make sense, even when I researched the many layers of symbolism and the history behind it.

Not so long ago, though, I had a powerful series of experiences following a theme of how Jesus loves me. When I learned that the Sacred Heart and Divine Mercy images are related—are, in fact, different ways of saying the same thing—I felt a click.

Putting the two together, using them as bookends to the message of how much Jesus loves me in the specific (as opposed to me in the general “every single person” sense) made me realize, once again, that Mary had brought me to Jesus once again, this time through her Immaculate Heart.

Jesus was so tender. He was so gentle. He was such an anomaly of what I stereotype a man to be. And yet, in the Sacred Heart image, with his heart exposed for everyone to see, he was asking me to reach out, to trust, to take a step into his arms.

I found my self in those scratched wooden pews, and it was the person God designed me to be. I discovered that I was loved, and it was a love that overflowed in rivers of tears during Mass. I was touched, again and again, by mercy and grace, and it was more than I could contain within.

It may have been the Immaculate Heart above, but it was the Sacred Heart within.

Being Green for God’s Mercy

Sending Out Some Hugs (apologies for ranting)