Posted by Guest | guest post, Inspired by the Virgin Mary | 9 | 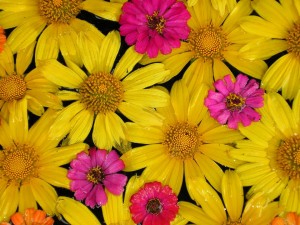 In the mostly Catholic Philippines, May is the month in which daily venerations to Mary take place. This custom, known to Filipinos as “Alay kay Maria” (offering to Mary), or Flores de Mayo (Flowers of May), which began in 1854 after the Vatican proclamation of the dogma of the Immaculate Conception, spread throughout the Philippines and included rituals such as the offering of flowers to Mary every afternoon during the month of May.  The rosary is also recited and Marian hymns sung.

Filipinos who left the Philippines brought this tradition with them.  For me, raised by parents who had emigrated from the Philippines in the late 1960s, it is a wonderful way to connect with other members of the Filipino community. At Immaculate Conception Church in Durham, NC, the Filipino community has been celebrating Flores de Mayo since May 1987.  Julie Olimpo and her parents, Pedro and Rufina Castillo, were instrumental in starting this tradition at IC, which today includes Filipinos and non-Filipinos alike from all over the Triangle, as well as others coming from places as far as Greensboro and High Point.

In 1986, an acquaintance of the Castillos traveled to Fatima, Portugal, and brought three statues of Our Lady of Fatima, one of which was given to IC.  The Castillos decided to start a weekly Black Rosary devotion in August 1986, in which the statue traveled from house to house and the Fatima prayers and the rosary were recited.

The following May, the Castillos wondered if it were possible to bring Flores de Mayo to IC.  “It is a major event in the Philippines,” said Olimpo.  “There is a daily devotion, and on the last day of May, in the town there would be a procession, floats, and bands playing music.”

Fr. Donald F. Staib, who was the pastor at IC at the time, was aware of the Filipino Catholic traditions, having spent some time in the Philippines himself, and because of this, “it was easy to get IC involved in this tradition,” said Olimpo.

Since May 1987, Flores de Mayo has become an established tradition for Filipinos all over Central North Carolina. Daily devotions during the month of May take place in various houses:  “At first, all the days of May were placed in a basket, and those who participated picked out a date to host the Blessed Mother in their homes,” according to Olimpo.  “Presently, the host families choose a date that is most relevant to their interests or spiritual needs,” she said.  The Cruz family, especially Chris and Pat, were also part of the establishment of this tradition, and they supplied the songs and helped the Castillos organize Flores de Mayo as it is celebrated today in the Triangle area.

For these daily devotions, people would gather at the designated host family’s house and pray the rosary. In between decades, Marian hymns in Tagalog and English are sung. Sometimes, a Mass follows the rosary. After the Mass, people stay to eat and socialize.

The month-long devotion to Mary traditionally ends with a fiesta on the last day of May. The Filipino community in the Triangle organizes such a fiesta, which takes place on the last Sunday of May, with a procession of the Lady of Fatima statue on a float decorated with plenty of flowers. In recent years, the statue of the Holy Infant of Prague had been added to the procession.  The men and women would wear native dress (barong tagalog, which is a thin, transparent button-down long-sleeved shirt for the men, and a Mestiza or Terno dress for the women, featuring wide, butterfly-shaped sleeves made from a similar material as the barong tagalog). Traditional songs are sung, most notably Dios te salve, Maria as the procession makes its way towards the church. Each year, a Hermano/Hermana Mayor is chosen to host this Mass, and it is usually followed by a reception featuring foods one would find at a typical Filipino fiesta like pancit (stir-fried noodles with vegetables), lumpia (fried egg rolls), jamon en dulce (roasted ham with pineapple and cherries), and a whole roasted young pig (lechon).

I had written most of the above in 2003 for Immaculate Conception’s newsletter. Since then, this celebration has become bigger and attracts Filipinos from all over North Carolina. This tradition is celebrated by Filipinos all over the world and brings together young and old in devotion to the Blessed Virgin Mary.

When Lyn Francisco is not at the lab bench, she is an organist. She’d be in a church nearby, occupying an organ bench and blowing dust around the nave. (Just kidding.) She is an organic chemist by training and education who just happens to like to dabble in the church music and organ world every once in a while. You’ll find her blog at Organ-ic Chemist, and she’s also on Facebook and Twitter.

Curing the Summertime Blues, by Maia

A Poem and 3 Books