For the Love of Horse

When I was ten or eleven, my parents drove me three hours away to a week-long camp.

I came back in love.

His name was Stormy, and he was beautiful, and, as it happened, he was for sale.

I knew what my dad would say…

…but that didn’t stop me from asking.

I still have pictures of Stormy in an old album. I remember how it felt to sit high up on him, and I remember how I almost ran out of underwear that week at camp. (The two are not related, I feel sure of it.)

So when we discovered Copper a mere 20 minutes from our house, and when we later met Raspberry, I knew two things for certain:
1. We would be going back as often as possible.
2. My husband really was as horse-crazy as me. (Well, as horse-crazy as you can be when you’ve “grown up” and (in theory) grown past the horse-crazy stage of your life…)

You see, I almost forgot.

Was it possible for me to forget what joy the smell of a horse’s mane could bring me? Did I really almost write off that equine elation as something I needed to get past? Would my life have as many smiles?

Maybe it would. I have a husband and children and plenty of reasons to smile in my life. 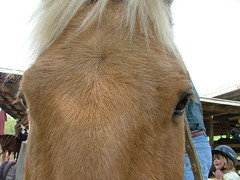 This is ‘pongebob (yes, a horse named Spongebob, but he can’t help what he’s named or that he’s, well, yellow). (For anyone who’s as horse-crazy as we are, there are pictures of our new friend here.)

In fact, we can’t wait for our next trip up to the horse farm!