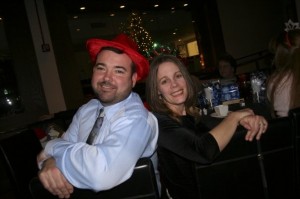 This Mary Moment Monday is a tribute to the guy who introduced me to my heavenly mother, who continues to lead me to her, and who has encouraged me, every step of the way, in this endeavor to share her with everyone else.

Today, my Prince Charming (who has earned that title) turns 40.

For some, this would be a chance to have an “over the hill” party, but I sort of eschew that. Ten years ago, when he turned 30, I did arrange a surprise party. It went over quite well, and I found out later it was one of the only (maybe the only) surprise party he had ever had.

Maybe it’s the way this year has gone that’s changed my perspective. Maybe it’s that, in the decade since we’ve dated and married, he’s become more dashing, more incredible, and more thoughtful than he was before.

If he’s over the hill, then I like him that way. If he’s old, then I prefer him to be. If he’s “done,” then I take that to mean “aged like a fine piece of beef” (without the objectification inherent in that phrase).

He’s a gallant guy, my Bob (though you may know him as Robert). He gallops through downpours with four of his favorite girls, suffers through saddle sores on a Sunday at a banquet for his lovely wife, and brings home the bacon and then doesn’t get to eat any of it. And that was just this weekend!

You won’t hear him complaining about the things that bother him, and you won’t know about the big plans he has until he’s figured out how to pull them off. He isn’t off bowling or golfing, because he wants to spend time with the girls in his house, the one whose hands he kisses at bedtime and who he calls “Beautiful” by way of greeting. Those might be tears in his eyes, but if so, they are only the tip of the iceberg; he’s a deep thinker and a deeper feeler, but silent, mostly, about both.

He’s an everyday hero, my 40-year-old knight. He lives for the pictures I text him on riding day, for the notes we exchange, for the small gift of life that comes his way thanks to the blessing of his family. He gives first and rarely asks.

I am pretty sure that, if I were to meet St. Joseph face-to-face, he’d be a guy a lot like my husband: humble and witty, smart and wise-beyond-his-years, hard-working and sacrificial, devoted and faithful. When I look at my husband, tall and strong at 40, I see what “good and faithful servant” means, and I’m inspired…and very, very humbled.

I look at my husband on this milestone birthday, and I see how far he’s come and how far he can go, and it’s exciting. I think of Mary, the wife, and she’s the Mary I look to today. She’s the Mary I’ll ask to guide my husband as he goes through his day today, possibly working late and probably not even thinking about his new age. She’s the Mary I’ll be inspired by as I do the household chores with a little renewed vigor today.

Mary in the Craziness