Is religion something to be free from? {An Atheist and a Catholic}

Last week, we discussed Brittany’s approach to atheism. This week, we’ll be looking at whether religion is something we need to be freed from. You can see all the posts in the An Atheist and a Catholic series here.

Sarah: Why is it necessary to be “free” from religion? In what ways is religion an evil or, at the very least, a Non-Good?

Brittany: I think that people’s beliefs are their own. People have a right to practice their religions in the way that they choose, and while I talk about my religion and work for an organization with a non-believing identity, in my ideal world we’d be able to believe different things without getting worked up and trying to convince others.

I think part of that is being an American. We believe pretty strongly in separation of church and state, even though as a country we’re more religious than some other Western countries with official state religions.

I’m not convinced that religion is a Non-Good. I can think of lots of ways that it can be a definite force for good. For example, confession is a good way to talk to a confidential third party about problems. Prayer is good because being thankful is good for mental health. Fasting and sitting through church teaches politeness and self-control. Lent is a good time to evaluate bad habits and start good ones. Adoration is an exercise in mindfulness.

I had the privilege of talking to Rebecca Vitsmun (the atheist interviewed by Wolf Blitzer following the OKC tornados), and she talked about how well-organized the religious groups were in their disaster relief efforts.  We can take lessons from religious groups in these areas. I’m not saying that we need to start an “atheist religion,” but we can learn a lot from the service and communities that religious organizations do so well as a matter of course. We can do more (and better) than just exist in online chat rooms to make fun of people, which is a stereotype about atheists with a grain of truth.

As a non-believer, I’d say that people can get all those benefits people get from religion from other exercises, but the community, rituals, and practices that are associated with religion are appealing and powerful for a reason.

I think the problem comes when the belief supersedes values. But I don’t see it as a problem that only exists with religion; it’s an issue with a lot of organizations. Catholicism gets picked on a lot because of the scandals with priests and coverups of molestation, but other churches, Boy Scouts, Penn State, etc. have also put the beliefs or public face of their organizations before the values they actually stand for.

Sexism is another problem to bring up here: a lot of people characterize religions as anti-women, but the atheist movement has also had its fair share of sexism, as has the SciFi community and the Gaming community, none of which are religious.

It’s also hard to separate culture from religion. As a result, I have a bigger problem with dogmatism and injustice than religion per se. If a culture is sexist or doesn’t value children, religious and secular organizations will reflect that. We have a responsibility as humans to fight injustice, and I don’t care if you’re by my side fighting because you’re religious or because you’re not, so long as you’re helping.

Next week, we’re talking about dialogue, especially as it relates to a recent talk Brittany gave (which you can watch here). See you then!

To Mother Mary on Mother’s Day 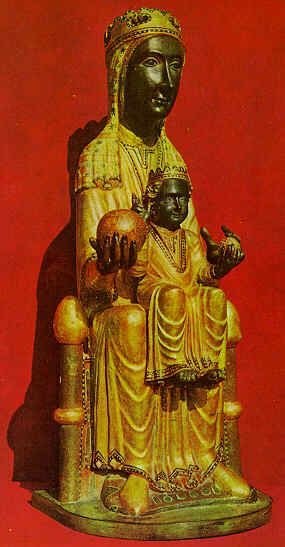 Mary in the Mountains