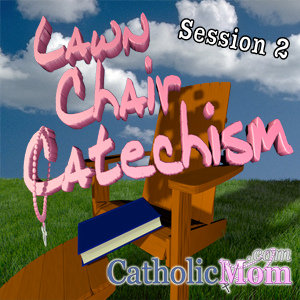 Time for our weekly Lawn Chair Catechism discussion! This week’s post is up over at CatholicMom.com, and I’m joining the discussion here.

This caught my eye, and it didn’t surprise me. In fact, I nodded.

The Pew “U.S. Religious Landscape Survey” of 2008 shows the fastest-growing religious demographic in the United States to be “unaffiliated” (aka “nones”). These are the one in six American adults who say they are not affiliated with any religious group or tradition.

I used to be pretty disenchanted with Christianity and religious faith traditions. And I was a probably a pretty strong “none” for quite a bit before I began the journey that would lead me to the Catholic Church.

I also really relate with this next bit I want to share, which is in the context of a discussion of why people leave the Catholic Church. Their response, often, is enjoying the new faith’s services and worship. Weddell comments,

As frustrating as it can be for Catholics to hear this, it is critical that we listen carefully when spiritual seekers give us their reasons for changing faiths. It is all too easy to project our own passionately held theological and ecclesial convictions upon people who are motivated by entirely different questions and concerns. I cannot tell you how many times I have heard intelligent Catholics casually dismiss evangelical worship as mere “entertainment” while showing no understanding of what motivated millions of their former Catholic brothers and sisters to embrace that form of worship in the first place.

It doesn’t stop there, though. Weddell shares a conversation where she nails it and points out that the person who transferred to the evangelical worship didn’t actually use the word “entertainment.”

The “entertainment” thesis reflects our Catholic insider judgements about what we presume must have motivated those who left the Catholic Church for evangelical communities. But none of us had ever heard a living former Catholic use that language.

I do have a personal relationship with God and Jesus, but it didn’t get to be mature and what I’d call anything close to good until I became Catholic, and in the 12 years since that Easter Vigil where I joined, I’ve come a long way. There’s something about the Eucharist, actually consuming God’s very flesh, that gets me. Every. Single. Time.

You don’t have to be Catholic to be “right” or “correct.” I credit my non-Catholic upbringing for my conversational approach to prayer in my own head (out loud in a group is something else entirely). I think it’s because I wasn’t raised with the statues that I can look at them and think, “Hey, if Mary can say Yes to something as impossible as being God’s mom, I can say Yes to something as mundane as today’s task list.” “Hey, if that saint struggled with a temper or cursing or selfishness or {list a pet peeve}, and they still kept turning to God, then so can I.”

It’s all too easy to feel beleaguered, and I think it’s a temptation for many of us. We think, “I could NEVER do THAT” and before we even start, we give up.

And that’s why turning to the Eucharist—whether during Mass or in a quiet moment at Adoration—really is food for the soul, strength for the journey, help for the struggle. We can’t do it alone, but God isn’t asking us to do it alone. I pretend I can do it myself, that I have to do it myself, when in reality I’m standing there like a petulant child, eyes squeezed shut and hands shoved over my ears.

I agree with Weddell on this, but I also think it’s possible to take this as a negative statement. I read it as one filled with hope. I work with young people in our parish as a catechist and as a mom.

They don’t want a weak-kneed faith. They don’t need “cuz Grandma did it” reasoning. They can take the hard facts, the capital-T Truth, the beauty and fullness of our Faith.

And so can the adults.

Join the discussion over at CatholicMom.com! There’s a summary (you don’t have to read the book to participate!) and some great questions to get you started.

A Corner of My Own