Today, I’m honored to welcome Ginny Moyer for an interview.  Ginny blogs at Mary and Me and is the award-winning author of Mary and Me: Catholic Women Reflect on the Mother of God (which I reviewed a while back).

Ginny, I’ve gotten to know you through your blog and your book.  For those readers who aren’t familiar with your work, share a bit about yourself.

Thanks for asking!  I’m a thirty-something mother of two young boys, Matthew and Luke (this is usually where people start cracking evangelist jokes).  I’m also a writer, high school teacher, blogger, gardener, and sporadic exerciser.    Last year my book, Mary and Me: Catholic Women Reflect on the Mother of God, was published.  It’s a book in which forty-six women of all ages share their own experiences of the Blessed Mother.   Writing the book was an amazing experience … more on that in the next question.

On my blog, I identify myself as a “formerly lapsed Catholic.”  That seems like an odd way to introduce oneself, but it’s such a huge part of my identity as a writer and just as a human being, too.  I was a cradle Catholic who went to parochial schools through high school.  In college and my early twenties, I basically wanted nothing to do with Catholicism.  But then, in graduate school, I began to be pulled back to the faith.  For the last twelve years, I’ve been on a really joyful (and often very surprising) journey of reengaging with Catholicism, and getting to know it as an adult.

I know you’re a big fan of the Blessed Virgin Mary, Ginny.  How did that devotion start, and how does it play out now that you’re a mother yourself?

My elementary school was staffed by the Sisters, Servants of the Immaculate Heart of Mary.  They had a very strong Marian devotion, and that permeated most aspects of the school.  As a kid, I really admired Mary.  She was so beautiful and queenly.

During my years away from Catholicism, I had a very different reaction to Mary.  She seemed to represent lots of negative things, like passivity and unreachable perfection.  I was pretty disenchanted with her during my early twenties.  But as I reengaged with Catholicism, I began to see that there was so much more to her than I’d thought.  Little by little, she began to edge her way into my affections, and I started to see her as a very strong, even gutsy woman.

Interestingly, it was tragedy that helped take my devotion to another level.  Before my sons were born, I suffered two pregnancy losses – an ectopic and a miscarriage.  Each of those losses ended up bringing me closer to Mary, in ways that I would never, NEVER have expected (I go into the details in Mary and Me).  And as I wrote the book, and as I talked to so many diverse women about their experiences of Mary, I just kept finding more about her to love.

And gosh, as a mom, I just adore her.  It’s such a relief to know that she “gets it” – the unconditional love and the mom-worry and the absolute terror that I feel at the mere thought of ever losing my boys.   What a gift to have such a woman in my faith life! 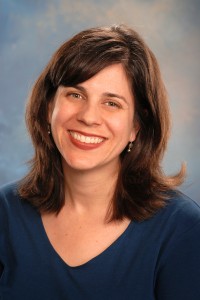 As a Catholic wife and mother, what are your biggest faith hurdles?  How do you work to overcome them?

Without question, the biggest faith hurdle is establishing a regular prayer life.  Oh, I’ve tried so many different things.  Earlier this year, I thought of doing a Year of Prayer, and taking each month to try a different form of daily prayer (the rosary, spiritual reading, praying with the saints, etc.), just to see what I liked.

I kept it up for about four months, and then it just sort of fell apart.  For one thing, I never quite hit on the best time of day to pray.  But the other thing I realized is that the exercise was turning prayer into one more thing on my “to do” list.

So lately, I’ve been trying mindfulness: thinking of God and inviting God into each moment.  I imagine God sitting with me as I email or drive in the car or do umpteen million other things.  I tell him whatever is on my mind, even the stupid things.  It’s feeling more like a real relationship now than it has for a long time.  That’s a good thing.

Now, I live firmly in the heart of the Midwest (which, on a good day, I’ll call God’s country along with all the other Buckeyes), so I can’t help but see greener grass where you live in California.  Are you native to that area?  What do you love (or hate or both) about life in California?

Yes, I’m a native Californian.  I grew up in Silicon Valley; my dad was an electrical engineer, as were most of my friends’ dads.  In spite of that, I have managed to become one of the least tech-savvy people I know (just ask my husband).

Where I live (the San Francisco Bay Area) is really beautiful, and wonderfully diverse.  It’s great to go to Mass and see so many different people from so many different places.  It really underscores the global nature of Catholicism.  And, interestingly, California has quite a Catholic past, with its chain of missions up and down the state.
That said, it’s crowded here.  And once the rainy season of early spring has passed, you don’t get rain until the late fall, usually.  That’s not necessarily a bad thing, but it means that the hills turn brown.  I like green.  When we visit my in-laws in upstate New York, I just can’t get over the forests, and those lush hills.  It’s gorgeous.  I think I have a little bit of green envy.

You are one of the Catholic moms I look to in my ongoing battle against the juggling disease.  As a high school teacher, writer, mother, wife, and many other things, can you share some wisdom with how you get it all done?

I guess it’s a few things.  I’ve let myself off the hook in terms of cleaning on a rigid schedule.   I clean house when I just can’t stand it anymore, or when company is coming, but I don’t do it every week.  My husband fully supports me in this, bless him.

When I’m teaching, about two meals a week are the frozen-in-a-bag-dump-them-in-the-skillet variety.  I actually like cooking, but I save the more ambitious dinners for weekends and try to make enough for leftovers.

Both of the boys are amazing sleepers; once they’re down at night, they’re down.  That’s a lifesaver in terms of getting work done in the evenings.   My parents live nearby and are eager babysitters, which is a HUGE gift, and my husband has a bit of flexibility with his hours.

And, you know, you find time to do the things you really love (that must be why I clean house so rarely).   In a way, I don’t think writing is really a choice for me.   It’s my sanity-saver.  It’s also a form of prayer, too, come to think of it.

Ginny, thanks so much for sharing so much with us.  Is there anything else you’d like to share?

Come visit my blog!  It’s called Mary and Me, and that’s pretty much what it is: some of the posts are about Mary, and some are about me and the random topics that fill my days (including Sesame Street, watching BBC dramas, and looking up the definition of “corker.”)  I’d love to get to know you there!

In Honor of Mary