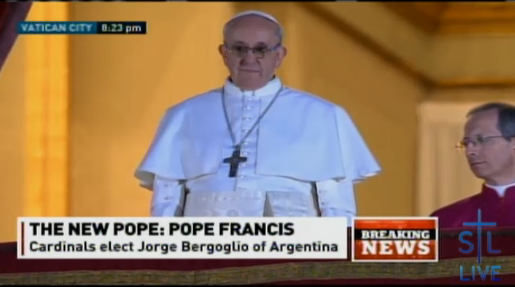 A day in 2005. I was a new mom, a fairly new hand at parish secretarying, and still very much a searching sort of newbie Catholic.

My baby was napping, I was trying to get work done, and I have no idea what clued me in to turn on the little 14-inch (or was it smaller?) TV in the office. (I had to hold the antenna just so in order to see more than just fuzz.)

There he was. “Habemus papam!”

Fast forward to today. I knew I had a LOT of work at my computer to do, so I figured I’d be a Cool Catholic. I was trying to be Conclave Watcher Lisa Junior: I had the Vatican’s live YouTube feed on as I bribed myself with other feeds after I completed, well, anything at all.

And then, surprise surprise, WHITE SMOKE! I caught the notice from a friend on Google+ before I heard the noise on my Vatican cam increase.

The next five hours–was it really only a bit over one? REALLY?–were some of the best of my Catholic life. Seriously. If I couldn’t be in Rome, I’m so glad I could be united with friends around the world who were sharing the moment with me.

After the initial leaping and dancing (and the kids eyeing me warily), I found myself suddenly a bit…overwhelmed. And starting to get teary.

And we didn’t even know who he was yet!

I don’t remember the waiting taking so long last time. Did it? Or was it that we just didn’t have the information so readily? Since I wasn’t watching it with talking heads (I didn’t turn on EWTN until right before the big reveal), it was a sort of silent thing, punctuated by cheers and chants from my Vatican stream.

There were texts with family members and tweets with friends. There were conversations on Google+ and insights on Facebook. I found out what Marian feast it was (Our Lady of Vladimir, thanks to @magmom13 on Twitter)

And then we met him. 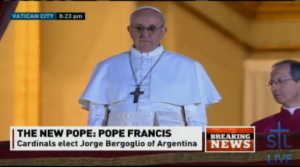 That moment where he asked everyone to pray for him first? Where he bowed? 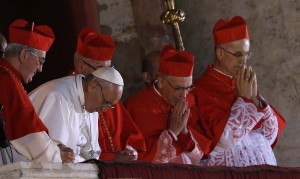 I’m getting a little choked up even as I type this: I was so touched by the humility and peace he exuded from the balcony, our pope who surprised so many, who is a first in so many ways (many of which I’ll bet we are going to enjoy discovering).

And his team’s already been tweeting: 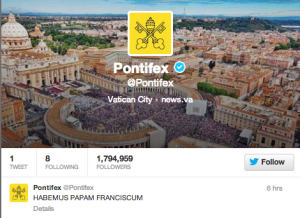 I love him already.

Contemplating the Visitation with Zechariah

The calm, the bright – our waiting brings us closer