In Honor of Mary

Posted by Sarah Reinhard | family, Inspired by the Virgin Mary | 1 | 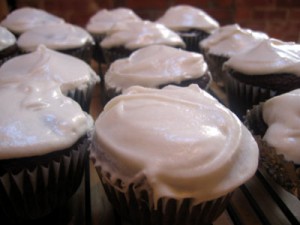 We had brownie batter for breakfast, made a batch of cupcakes before kindergarten, and licked all the spoons, bowls, and assorted counter tops.

You might say it’s just an excuse to be badly behaved. You might, in fact, be right. (Ain’t it grand to have feast days, though?)

The truth is, I’ve never taken the time to observe the Blessed Mother’s birthday with my kids before.

I’m not a naturally crafty person, for one thing, and many of the suggestions I’ve seen for celebrating Mary’s birthday involve crafts and cooking (and we all know how I am in the kitchen!). And, for me, birthdays are highly personal. Sometimes, it’s better to cocoon on a birthday, you know? Instead of trumpeting about it, I like to tuck myself in and disappear. I’ve been that way for a number of years, and my husband has a gentle way of dealing with it. I have no idea why I’m this way; my kids surely aren’t and I am pretty sure everyone else I know loves their birthday. I just…don’t. Haven’t for many years. No idea why.

So…here’s Mary, with a birthday. Honoring her is a given in my world (though my ways of doing so are perhaps not ideal, less than perfect, and very flawed). Though I posted about Mary’s birthday on Monday, about mid-morning, I realized I had forgotten to wear blue, I hadn’t said a Hail Mary, and my day was on track to turn out less-than-stellar. It was then that I made a  decision: we would make cupcakes in addition to the brownies we were already planning to make for my husband to take to work. Though the cupcakes smell delicious, I know they will lead to a holy mess when we ice them later. Because of course I’m letting the kids ice them. And sprinkle them. And eat only the tops.

Why not? It was one way to honor Mary and to involve the kids that didn’t involve scary supplies and levels of coordination only my husband could achieve. And…it will taste great later. 🙂

It’s a bit of an extravagance of sorts, but it’s also a message to myself. These little hands that are so eager to help me won’t continue to be enthusiastic about the helping if I squash them all the time. They might not think of Mary as someone approachable and even fun if I don’t take the time to talk about her the way I write about her. And, hey, I’m pregnant. Don’t you think chocolate cupcakes are just the thing I need in my 28th week of pregnancy?

However your day is going today, it’s not too late to give a nod to the Mother of God on her birthday. However you feel about birthdays in general and Mary specifically, it’s a chance to take her hand in yours and let her lead you to the greatest gift any of us have received: her Son.

The Reminder of Humility