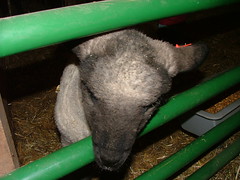 I knew I was out of my league when she came barreling toward me. She weighed at least as much as I did, and she was much more passionate in her goal than I was in mine. She wanted out, and, seeing her come toward me, I wanted out too, out of the way.

My brother-in-law or husband — I don’t remember which — saved me. They hadn’t been foolish enough to leave me in charge of something so important as the escape route the sheep were bound to take. I was the observer, the chronicler, the wanna-be. I held the camera, spooking the sheep with my flash; I interrupted the sheep talk with questions and observations that were inconsequential; I spoke too loudly in the calm of the barn. One of them came over and caught the ewe. They made it look easy, but I wasn’t fooled. There was no way I was going to be able to do that. If not for the gates and the men around me, my participation in the activities in our barn would have ended then.

You can read the rest over at my column this week at Today’s Catholic Woman.

Give Her an Inch