An Interview with Dr. Brant Pitre and an Excerpt from Jesus the Bridegroom,

Dr. Brant Pitre’s new book, Jesus the Bridegroom: The Greatest Love Story Ever Told tackles something that I find confusing when I stop to think about it.

Jesus, a bridegroom. OK, yeah, but isn’t that a metaphor?

Turns out, not so much. 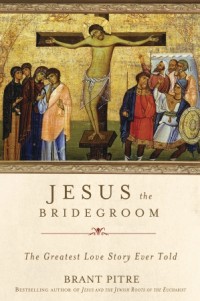 According to the the blurbage, Jesus the Bridegroom: The Greatest Love Story Ever Told, the book

taps into the wells of Jewish Scripture and tradition, and unlocks the secrets of what is arguably the most well-known symbol of the Christian faith: the cross of Christ. In this thrilling exploration, Pitre shows how the suffering and death of Jesus was far more than a tragic Roman execution. Instead, the Passion of Christ was the fulfillment of ancient Jewish prophecies of a wedding, when the God of the universe would wed himself to humankind in an everlasting nuptial covenant.

If Pitre’s name sounds familiar, it might be because of his other book, the really popular one: Jesus and the Jewish Roots of the Eucharist (2011, Image Books).

Pitre’s a Louisiana resident with a wife, five kids, and probably a house full of cool parade gear junk, if I have my geography correct. (The parade season in New Orleans has inspired me, what can I say?)

You’ll find him teaching scripture at the seminary by day and lecturing packed auditoriums by night. I suspect he keeps a cape in his briefcase and has superpowers such as not needing as much sleep as the rest of us and remembering everything he’s ever read.

He was kind enough to answer not one, but two sets of questions from me (my next interview of him will be posting at Integrated Catholic Life on Monday, March 17), and Image Books sent me an excerpt to use.

Q: Brant, I’m assuming that since you’re a professor and a writer, you probably do a lot of reading. Tell us the best couple of books you’ve read lately.

Wow! You go straight for the hard questions. Right now, I’m reading Ralph Martin’s The Fulfillment of All Desire. It’s a fantastic introduction to spiritual theology; every serious Catholic should read it.

I’m also working through a new book on the apostle Paul by the Anglican scholar N. T. Wright, entitled Paul and the Faithfulness of God. It’s an amazing study; but it’s also 1700 pages, so I’m not quite done yet!

Finally, I recently finished Pope Francis’ Joy of the Gospel, which is virtually a book. It’s the first time a papal document has ever moved me to tears.

Q: As a professor, you have exposure to young people in a way many people don’t. How will your new book reach this audience? How will they respond to the themes you set forth in Jesus the Bridegroom?

One of the great things about writing Jesus the Bridegroom was that I had the opportunity to try out the ideas with students in an entire course I taught on the topic. If my experience there was any indicator, the students really responded most deeply to the idea that all of human history is a divine love story, and that at the center of this story is the Crucifixion of Jesus.  The classes where we explored the Passion of Christ through the lens of an ancient Jewish wedding were electric. At certain points, you could hear a pin drop. I’ll never forget the experience of teaching about this topic for the first time.

The students also seemed to enjoy using the Old Testament to unlock the hidden meaning of otherwise familiar passages from the Bible, such as the Song of Songs, the Wedding at Cana, the Woman at the Well, the Last Supper, and the Book of Revelation. Since the Old Testament’s often unfamiliar ground to many Christians, it can be exhilarating to read the New in light of the Old, and the Old in light of the New, which is what I do in this book.

Finally, serious young Catholics these days are also very focused on discerning their own personal vocation. Jesus the Bridegroom speaks directly to that issue, by focusing on the nature of the personal, spousal relationship between Christ and the Church. It pushes you to ask the question: How do I see Jesus? What kind of relationship do I have with him, as a member of his Bride, the Church? 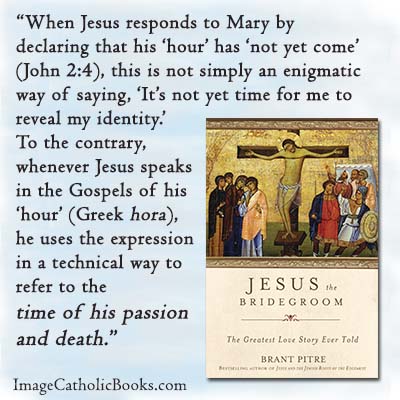 Q: What’s the greatest reward from all of the writing and speaking you do?

Just knowing I played some small role in helping people get to know Jesus better. My hope is that the reader will come away realizing he was more than just a great Teacher, or Miracle Worker, or even the Messiah. He was (and is) the Bridegroom God come in the flesh. That means he mission wasn’t just to save humanity from sin and death. He came and died on the cross in order to unite us to himself forever in a personal relationship of love.

So many people today think of salvation simply as ‘not going to hell’. But if Jesus is the Bridegroom Messiah, then salvation is not just about deliverance from sin; it’s about union with God. And the way he achieves this union is precisely through the Wedding Banquet of the Last Supper and the Wedding Day of his Passion.

Q: Who do you find most moved by this book? Does that surprise you? Was that your intent?

Interesting question. As I’ve spoken about the topic around the country, I’ve been struck by the way it hits everyone, no matter what their particular state in life.

I knew from the start that nuns would love it—and they do! (They’re married to Christ, after all! What do you expect?) I also figured that Christian women would be open to and interested in the idea of Jesus as Bridegroom. I didn’t anticipate how consoling it would be for women who came up to me after a lecture to tell me that, after having abandoned by their husbands, it gave them joy to realize that Jesus is the true Bridegroom of the Church, that the Eucharist is his wedding banquet, and that he would never forsake them.

As a husband myself, I knew that it would challenge Christian men to be more like Christ the Bridegroom in their relationships with their wives and families. (The section on Ephesians 5 might be challenging for both husbands and wives!). What I didn’t realize how is much it impact it would have on men discerning the priesthood, in their desire to act in the person of Christ the Bridegroom in ministering to the Church.

In short, there’s something for everyone in this book, because the mystery of Christ’s love is universal.

Q: What’s your favorite part of Jesus the Bridegroom? Why?

My favorite part of the book is the chapter on “The Woman at the Well” and the last chapter, called “Beside the Well with Jesus.” These are about the famous story of Jesus and the Samaritan woman. I love these chapters because the Samaritan woman is not just a bridal figure (you’ll have to read the book to find out how!); she’s every one of us. She’s every sinner. She’s every broken person in this world who’s ever made a mess of their lives. And none of this stops Jesus the Bridegroom from pursuing her.

Despite her many sins, it is Jesus who first seeks her and asks her for a drink. In other words: God thirsts that we might thirst for him. That realization has changed the way I see God, the way I live, the way I pray. I hope it can do the same for others.

Here is an excerpt of the book, courtesy of Image Books.

Excerpted from Jesus the Bridegroom by Brant Pitre Copyright © 2014 by Brant Pitre. Excerpted by permission of Image, a division of Random House LLC. All rights reserved. No part of this excerpt may be reproduced or reprinted without permission in writing from the publisher.

Excerpted from Jesus the Bridegroom by Brant Pitre Copyright © 2014 by Brant Pitre. Excerpted by permission of Image, a division of Random House LLC. All rights reserved. No part of this excerpt may be reproduced or reprinted without permission in writing from the publisher.

Down-Home Explanation of Our Lady of Perpetual Help

God’s Will on the Refrigerator Door