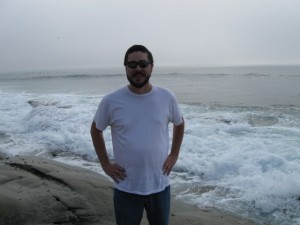 Greetings!  My name is Jerry Weber and it’s a pleasure to be a guest here.

I’m a San Diego, California, native and current resident, single with no children, high school graduate, and I have been working in the maintenance & operations field with school districts for about 11 years now.

I’m a Roman Catholic, fairly conservative in my political beliefs, and in many ways an old fashioned person.  My interests are Catholicism, music, sports, natural healing/diet & nutrition, home improvement projects, cooking, and being a guest on podcasts as well as guest writing on blogs like this one.

I have come a long way in my life. I was baptized into the Catholic Church as a baby, but never really had any interest in the Church until my late teens.  I used to be rather liberal in a lot of my beliefs, and if someone had told me when I was a teenager that by the time I was in my 30s I’d have short hair (loved and had long hair in those days), would be rather conservative, a supporter of someone like Sarah Palin, and a strong Catholic, I would have laughed at you.

I sure have changed a lot through the years. We are all a work in progress though.  God always shapes us, especially when we allow him to.  I’ve been no exception in that regard.  I’m pleased with how much he has helped me learn and grow, and I know many of you can relate in your own lives as well.

I have struggled with anxiety and depression issues for most of my life. I first noticed these issues when I was only in the third grade.  I have had many rough times throughout my life because of this, but I also believe dealing with these issues has helped to make me who I am today, and will continue to do so.

While I never asked to deal with such things, I was meant to for some reason, and I do believe that God can always bring good out of anything if we allow him to.  Anxiety has been more of a struggle for me than depression has, but believe me, depression has always been a guest that Anxiety seems to like to invite along with it.  I have had to deal with obstacles that only those who have experienced the same disorders would understand.

Sometimes, I have felt like I’m carrying a ball and chain.  Anxiety can often keep you from moving forward in life.  There have been times where I’m sure God has called me to do something, but because of anxiety I did not follow.

I have asked “Why me?” in the past, but I really don’t do that anymore.  Many of us are given physical or mental issues that we would rather not have, and it’s probably not fair that we have them, but it’s reality.  The impact that anxiety and depression have had on my life has often been negative, but I’m working as hard as I can to turn the impact into a positive one, and God is on my side in that regard.

Social anxiety is one of my hardest challenges, it’s made it very difficult to function whether it was when I was in school, or now at work.  Some people have told me through the years, “We all get nervous,” but social anxiety is well beyond just being nervous.

It’s a beast that grips you and makes normal nervousness look like a walk in the park.  Throw in a severe panic attack or two throughout the day and you have a very tough challenge to deal with that in itself becomes very depressing.  The older I get, the wiser I get, the more knowledge I obtain, and the more life experiences I go through, the better I have become at dealing with these things.

I owe any breakthrough or progress on this to God.

Next week, Jerry is going to share some resources that have helped him and also talk about how his Catholic faith has been a foundation in his journey.  If you’d like to hear more about Jerry’s journey, you can listen to the interview he did a while back on Catholic Moments.  Thanks, Jerry, for sharing your journey with us!