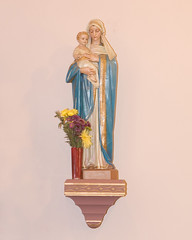 But did she want to?

Did Jesus ever scream and clamor and raise the roof of the synagogue? Did he take off for the altar at in the blink of an eye? Was Mary in near-tears, only to receive a thumbs-up (or the Hebrew equivalent) from an elderly lady in the back row?

There’s a statue at our parish of Mary holding Jesus, and it struck me, the other day at a particularly difficult (for me) daily Mass, that Jesus is about 20 months old. He’s not wiggling, and he’s not screaming, but is that an ornery glint in his holy eyes? He’s in the Holy Mother’s arms, content and in a holy place, but could that be dirt under his holy fingernails? Hark, do I sense grubby smelly toes in the vicinity of Mary’s hips? There weren’t Cheerios back then…were there? What is that in his hand then? 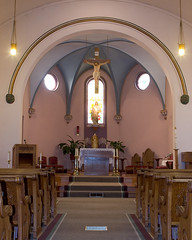 And then my gaze can’t help but move to the crucifix that hangs above the altar. It’s huge. And it reminds me that Mary, so calm with that toddler (who must have been a handful – he was fully human after all!), had to stand at its foot while her son was crucified.

The role of motherhood is nothing to sneeze at. This is a tough job. Thankfully, we have our Mother Mary to walk with us, to hold us, to comfort us in our trials. We have her example, pointing us to her son, pointing us to heaven.

A Rosary Lost, then Found

From His Mouth to My Heart