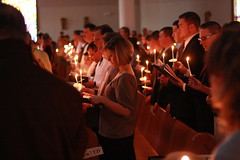 (Earlier posts in this series are here. Scroll down for earlier posts.)

It’s been nearly a month now since I came into full communion with the Catholic Church. There have been so many thoughts and reflections going on in my mind since Easter Vigil that I haven’t had a chance to put a coherent string of words together to describe the events or what has taken place in my life since then.

First of all, I must describe a little of how the church looked and felt that evening. Our RCIA class processed into the darkened church as a group and we were all handed candles. For many of you, this is probably not even worth describing as you’ve seen it all so many times, but it was an incredible representation of the darkness that followed immediately after Christ’s death. My sponsor and I were seated near the front of the church, near the altar so we could smell the Easter Lilies on the altar as well as the incense that burned. As the choir sang, and the lights came up I hit sensory overload and had to reach for the tissues (seriously, I do function without tears on a regular basis. RCIA has simply brought out so much emotion in me that it’s been a little hard to not be moved at times). I wept because of the events that happened on that first Easter so many years ago and because I knew my 33 years’ worth of sins were about to be forgiven. I wept because I was going to be able to receive the Eucharist and because I had true friends and family there supporting me. I doubt that many can point to the exact moment their sins were forgiven, but I can…and that is hugely powerful. So powerful, in fact that as I anticipated it, I couldn’t help but think that some horrible event may keep me from making it that far…I would get into a car accident on the way there, or a family emergency would take me out of town or I would come down with a bizarre, unidentifiable disease that would prevent me from getting there. But I made it. And what an incredibly beautiful ceremony it was.

Confirmation was beautiful too, and receiving the Eucharist for the first time was indescribable. For some reason though, it was the baptism that meant so much to me. And lest anyone out there think that I was forgiven for my sins and that was it, let me assure you; the baptism wasn’t the end, it was the beginning. It was a new start, and a new responsibility…one that I take very seriously.

Easter Vigil eventually came to an end and the rest of that weekend I felt the most incredible sense of peace. “How long does this feeling last?” I wondered. Day to day life sometimes interrupts our inner peace, so while the feeling faded a little bit I knew I would receive communion again. And when I did, I was surprised to get a little bit of that peace back again. The same thing happened when I passed by the holy water and crossed myself. These two practices I had once thought of as “just rituals” became very real to me.

My family has supported me in their own ways, but they do still occasionally hurl questions my way and I’m not always sure how to answer them. They look for scientific proof and more tangible evidence of their creator and they don’t understand how I can accept the Catholic faith. The day before Easter Vigil though, I heard something on the radio that explains the concept of faith so well that I plan to quote it when I am questioned again. This is a quote from Bram Stoker’s Dracula (read the full story here):

“You are too prejudiced. You do not let your eyes see nor your ears hear, and that which is outside your daily life is not of account to you. Do you not think that there are things which you cannot understand, and yet which are? That some people see things that others cannot? … There are always mysteries in life.” – Van Helsing from Bram Stoker’s Dracula.

Looking Closer at the Hail Mary: IS