If you’ve been in these parts for long, you’ve heard of Julie Davis. From her popular Catholic blog, Happy Catholic, to her delightful readings at the Forgotten Classics podcast and her insightful involvement in the A Good Story Is Hard to Find podcast, Julie keeps busy.

When, exactly did she find time to write a book?

How, exactly, does she keep smiling when she has all that, and a column deadline at Patheos, too?

Today, she’s agreed to answer a few questions and share her lovely smile with us. 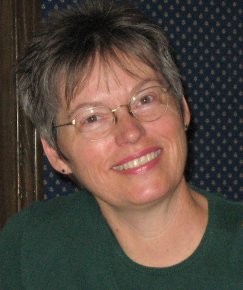 I’ve been a fan of your blog, Happy Catholic, for many years, Julie, and in fact, I credit you with my own start in blogging. Tell us why you started blogging.

I went on a retreat that our parish offers, Christ Renews His Parish. I was so lit up and made so many new friends that I spent a good part of my day emailing about the things I’d read or seen that I found inspirational. About that time I began seeing this new thing called Catholic blogs mentioned.

Finally, I thought that if I put the things I found in one place that it would be simple for my friends to come there to see them. Ironically, few of those friends actually do read my blog. However, I was surprised to see that a lot of other people did. So that was fun in a new way.

You’ve been blogging for a number of years. What keeps you going?

I have considered stopping several times. Thinking that either Happy Catholic was getting stale or that perhaps my time might be better spent in God’s service elsewhere (because, let’s face it, by now it is an actual ministry as well as my own self expression).

Every time I am really wondering if I should keep going, I get an email or comment telling about how God used the blog to touch someone. I take that as my answer and keep going. Also, it is just part of who I am by now. I think in blog posts much of the time, as you probably do also.

Who is/are your special patron saint(s) and why?

I have several saints that I am close to. My actual patron is Martha (from the Mary and Martha story in the New Testament). I was looking over a list of saints before I was confirmed and saw that she was the patron saint of housewives. I love being at home and cooking (though not cleaning). That aside, I figured that was as good a reason as any.

Little did I know that, once again, God was being sneaky in pairing me up with the perfect “big sister” to help me get through some of my worst tendencies. I love Martha’s friendship with Jesus to the point where she’d complain about her sister to him. I love the fact that she took his correction to heart so that the next time we see both of them in a big party, Mary is center stage washing Jesus’ feet while Martha is serving in the background. I love that she had the boldness to go to Jesus asking for her brother Lazarus’s healing and then went to him and said that she knew he was the Messiah. Those are all things I would like people to be able to say about me someday.

Another close and early saint “friend” is St. Augustine. We converts have to stick together. And I really appreciate his, “Grant me chastity and continence God, but not yet.” How many times have we all have had similar requests? Maybe not about chastity, but about something.

Another is St. Teresa of Avila. I like her sassiness and straight forwardness when she steps in a mud puddle up to her knee and God tells her, “This is how I treat my friends, Teresa” and she responds, “That is why you have so few of them, Lord.” She can say that because they are such good friends and because she speaks to him person-to-person. Yet while she was traveling everywhere in frail health, founding convents, she also was one of the greatest contemplatives ever. I continually learn about prayer from her. I am not a good pray-er so I need lots of help.

Recently, Servant Books released a book by you, Happy Catholic: Glimpses of God in Everyday Life. What’s your favorite section or quote from Happy Catholic? 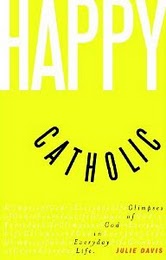 That is kind of like saying which is your favorite child. They are all favorites but for different reasons (the children and the quotes!).  However, one that I come back to time and again is from Futurama. It just seemed so unlikely to me that a show like Futurama would have an entire episode about God and his way of doing things so that no one can put their finger on it. Naturally, they did it in a completely sassy way, but as we can see … I like sassy. Plus God is talking to Bender in the only language that Bender understands, that of crime. Just the way he does to us.

It also exemplifies what I think so many people miss when they dismiss pop culture entirely. God’s in that just like he’s in everything else. Anywhere someone values the truth of honest story, they’re telling us something about his nature.

Jesus in the Rearview Mirror

God: Bender, being God isn’t easy. If you do too much, people get dependent on you. And if you do nothing, they lose hope. You have to use a light touch, like a safecracker or a pickpocket.

Bender: Or a guy who burns down a bar for the insurance money.

God: Yes, if he makes it look like an electrical thing. If you do things right, people won’t be sure you’ve done anything at all.

We are so often left like Moses, who asked to see God but only saw his hindquarters (see Exodus 33:23). We see evidence of God only in hindsight. Even then it can be very difficult to tell definitively that there was divine intervention unless you are the person for whom the miracle was done.

Anyone who has experienced a miracle will tell you that when God sends you a message you recognize it, even though others might not. Others are measuring by verifiable results. You are experiencing something that cannot be measured.

The Lover and the beloved understand. It is enough.

What do you find is the most compelling part of your story as more people read your book and you share your story with them?

If this doesn’t sound too presumptuous, it is that I get to see a little of how the Holy Spirit works.  Honestly, I am very often humbled by what people say that God shows them when reading the book. Very little of what they have found is what I put in there, if that makes sense. They are getting messages that I didn’t specifically write. That is God at work.

In a sense, it helps make sense of the Bible for me. I look at all those different books written over the ages by so many different people and all pointing to Christ Jesus. The Holy Spirit flowing under and within those words for each of us is what does the real lifting of pulling it all together for God’s work. To have a book (or blog) that is touched by even a hem of the Holy Spirit’s cloak (so to speak) is astounding and eye opening.

You keep quite busy with your writing and podcasting. How do you balance your vocations–wife and mother–with your evangelization efforts in New Media?

First, I’d have to say that I never see anything I do as “evangelization in New Media” because that sounds so deliberate. I wind up stumbling into everything I do, simply because it is so much fun.

As I mentioned before, the blog was an outgrowth of what I was already enjoying telling friends. My podcast Forgotten Classics grew out of my desire to push people into trying books that I loved but that I couldn’t get them to read simply by writing about. Who knew that an atheist would ask me to read Genesis and comment on it as literature because it is so ingrained in Western culture?

Likewise, my participation in reviewing audiobooks for SFFaudio grew out of my desire to get free books. I became friends with Jesse and Scott at that blog and occasionally participate in their podcast, where sometimes we wind up talking about faith and Catholicism in the most unexpected ways.

Scott is also Catholic and our desire to talk together about the Truth that we saw in popular books and movies led to our podcast A Good Story is Hard to Find.

I am no saint. But when I look at the way that I’ve stumbled into these projects, yet knowing while stumbling that it is also part of God’s plan somehow, I wonder if when we look at saints like Mother Teresa and pity them for the hardships they bear … if we aren’t off base. We’re seeing it from the outside. If they are doing what their nature tells them to do, in cooperation with what God pushes them toward, then maybe it is easier to be a saint than we think.

Maybe, as Thomas Merton’s friend told him, all we have to do is to want to be a saint. Our willingness is all God needs. He will do the rest.

As for how I balance things, I have an amazingly tolerant and supportive husband. Every time I have brought up one of these projects, he practically shoves me into it. Sometimes, I have been waiting for him to say no and willy-nilly I find him buying a mixing board, converting a computer to home use, and setting me up to record.

Also, I have had to learn how to say no more often myself. I have some projects, such as our parish’s Beyond Cana marriage retreat, where I was very involved for several years and then had to back out so that I could write the book and also because they needed to grow beyond my involvement. I don’t think I could add anything else right now without giving something up. And … it must be said … I don’t love cleaning house. So I teeter at the edge between acceptable cleanliness and what would embarrass us if people dropped in. Did I mention that I have a very tolerant husband?

What has been the greatest blessing in all of this, for you?  In all this work you do in the new evangelization, at the end of the day, what do you count as your greatest success?

God told me to start the blog when I was wondering if I should. I am positive he also wanted Happy Catholic (the book) written based on the astounding coincidences and timing that brought up the possibility of writing the book. Likewise, he has used my podcast in ways I never would have thought of.

So what is my blessing out of all this? To be his servant. I can never do it as well as I should. But to do what I love, in these communities in which he has placed me, for the one whom I love most … what could be better than that?

There are plenty more Quick Takes over at Conversion Diary, so don’t miss the fun!