It’s Game Day here, and we’re busy savoring every minute of our time with our visiting family. Tomorrow evening, it’s quite possible I’ll over-post in my enthusiasm to share how I attempted to capture the additional excitement that comes from sharing something that’s as special to us as an Ohio State game on a monumental wedding anniversary that marks a romance that began in the math department of this fine university. (*happy sigh*) (After an evening marked by long discussions of my husband’s upcoming math classes and his enjoyment of said subject (Aunt and Uncle are avid fans of math, and while I appreciate math and the ordered universe and the importance of competence in math, it’s just not forte), the conversation veered to the budding romance that began back in 1981 under the auspices of math and engineering and some kind of special chocolate.)

To hold you over, and because I know some of you – ahem – just don’t care about Ohio State football, here’s a picture from the last time Aunt & Uncle Gardener were in town, last April. The setting is undeniably Ohio State, but the tone is, I hope, completely different than the screaming mass that’s working they’re way to campus now. 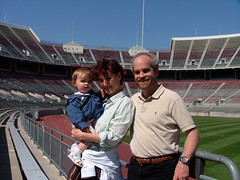 Sitting at the Kitchen Table

Rules of Attending the Game