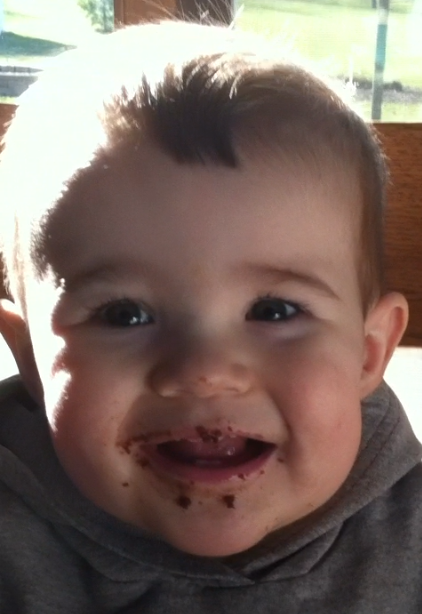 His little hand is so often wiggling out of mine as he screeches. He has places to go.

His little knees are getting a steady diet of bruises and his nose is covered in scabs from a meeting he had recently with some concrete. He has things to do.

His activity level is constant and both of us collapse at the end of the day. He doesn’t stop. 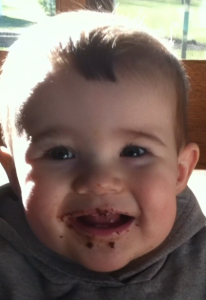 But that smile! It’s irresistible!

I can’t help it: I show my little man to everyone I can. He’s so different from my girls, and yet he is so very much like them.

Mary must have felt the same way about her boy, times ten and scrubbed for human failings.

It’s why we still turn to her now, why asking for her help doesn’t ever, in any way, go against turning to Jesus directly.

She can’t help it: she takes us right to him.

A guy who has a mom is different than the eternal Lord and Savior of the World, who can’t do anything wrong and never had dirt under his fingernails. Though both are true of Jesus, one is more approachable and real (at least for me).

A man whose mom must have shaken her head at his antics (sinless though they were) is different than the perfect person who seems to have been so perfect as to be inaccessible.

A guy with deep brown eyes and an ornery way of smiling is, well, huggable in a way that the statue in the front of church just, well, isn’t.

As my devotion to Mary has grown, so has my devotion to Jesus. I continue to marvel at this. I was the poster child for “I don’t need that stupid God man in my life” not so very long ago, and yet here I am, not just worshiping him, but picturing him with scraps of food stuck in his neck and a fistful of rocks clutched close to his belly as he scurried away to play after dinner.

Mary makes Jesus real. She makes it possible for me to know Jesus, to even like him.

Yeah, I know. I’m supposed to love him anyway. But how do you love someone you don’t know, someone you can’t relate with, someone who seems to be just a figurehead?

I’m understanding better, now that I’m a boy mom, how it is that I can love Jesus. I’m seeing how it’s not only possible, but overflowing from my heart. I’m aware of the goodness that isn’t restricted just to boringness, the laughter that’s not at anyone’s expense, and the ridiculous differences God created within each of us.

Now, let’s break from the serious stuff. Have you entered to win a Snoring Scholar SurPrize Pack yet?