A reflection on the word “AND”

When I was single, signing birthday cards was a straightforward process.  At the end of my message, I’d scribble “Love, Ginny,” and that was that.

Post-wedding, the process became a bit more complicated:  “Love, Ginny” gave way to “Love, Ginny and Scott.”   With the exchange of vows, I’d acquired not just a new last name but a longer written signoff.

Now, as the mother of two, signing a card is more complicated still:   “Love, Ginny, Scott, Matthew, and Luke.”    It’s no longer something I can dash off in three seconds; it takes more time, more space on the paper, and more muscle movement.  Sometimes, when I’m feeling lazy, I just scrawl “Ginny, Scott, and boys.”  When really pressed for time, I’ll make do with a quick “Ginny and Co.”

But regardless of which option I choose, there’s always an “and” in my signoff.  I’m no longer just one person, but part of a unit.  I’m part of a little family which, ten years ago, literally did not exist. 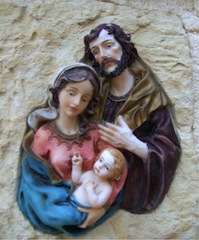 Admittedly, there are times when it’s not easy to be part of an “and.”  On the rare days when we arrange a sitter and go to the movies, my husband wants to see the latest action flick while I would rather watch the movie about English women in bonnets and gloves.  (Compromise ensues.)  As a mom, I find that one of my kids invariably needs my attention just when I’m getting rolling on a writing project.  Back when I was pregnant, the demands of being an “and’ were even more taxing; there was a little person inside me who ate everything I ate and drank everything I drank (goodbye alcohol, normal amounts of caffeine, and Brie).

But when I really think about this word, I can’t help but see it as a positive.  “And” means more.  It signifies abundance.  It means that you are not alone, but part of a family or a community.  It means sharing a past and present and future.  It means having someone else there with you, by your side and on your side, through smooth sailing and through storms.

Most of all, there’s the relationship that we see depicted on Christmas cards and in art museums all over the world.   It’s the relationship between Madonna and child, Mary and Jesus, mother and son.  It’s about two people, one who grew inside the other, sharing a connection that is universal and intimate and beautiful.

It’s the “and” that has changed the world.

Ginny Kubitz Moyer is the author of Mary and Me: Catholic Women Reflect on the Mother of God (which I highly recommend!). She blogs about faith, motherhood, and her serious book addiction at Random Acts of Momness.

Causing My Own Sleep Deprivation

Sanity is a matter of perspective

What’s with all the -ism? {An Atheist and a Catholic}