A reflection on the word “ART”

The word is ART, as in “Blessed art thou among women . . .”  God, through the Archangel Gabriel, calls Mary first “full of grace” (or “highly favored one”).   Then she is called “Blessed” over and above all other women.

ART is a form of the verb “to be”.  We recall from theological philosophy that God is being, God is existence itself.  We, as created by God, share in His existence.  So that while God is being itself, we have being.  God, as trascendent, has power and authority over all He has created.  If one has authority over what he has authored, then God has supreme authority over all creation.  Thus, God can create the whole universe with the word that comes forth from His mouth; thus God can even fashion His own mother, thus setting in motion our Salvation; finally, God can Himself dwell among us as one a human being, one of us.   In His great wisdom, God has thus fashioned our salvation from sin and eternal death.

God set in motion our Salvation through Jesus Christ, true God and true man, by using our human nature, indeed, our very human existence.  For God did not simply strap on a human being costume the way we may put on a disguise.  No, God adopted our human existence, right down to the molecular and genetic level, giving Jesus Christ a human heritage.  This is why those long genealogies in the Gospels of Matthew and Luke are so important.  They show Jesus as a true human being, with a heritage spanning and influencing history. 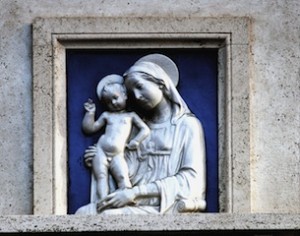 God, in His eternal authority, fashioned and chose Mary to be the catalyst for Salvation in Jesus Christ.  Mary was a created being through and through, just like us, except conceived without original sin (nor actual sin, for that matter).

What does this mean for us?   The Old Testament tells us that God, as He led His people out of slavery in Egypt, tabernacled among them.  He set up His tent, as it were, among His people.   Yet He still showed Himself as “the God of the High Mountain-tops”, El-Shaddai.   Just as high and inaccessable the high mountain tops were, even more inaccessable was God Almighty.  No one could even touch the base of the mountain upon which God chose to reveal Himself, lest they be struck down.

God also chose to have His glorious presence descend upon the propitiatory, the cover of the Ark of the Covenant, that space between the two cherubim wings.  The Shekinah cloud of glory rendered the Ark of the Covenant itself inaccessible.  The high priests had to carry it on poles, but were never to touch it lest they die.  (2 Samuel 6:6-7)

This incident could be the foundation for the Catholic conviction that Jesus had no other siblings by Mary.  Mary is meant to be the fulfullment of the Old Testament Ark of the Covenant, carrying Jesus, who is the Bread of Life, the ultimate High Priest, and the Word of God.  Just as no one was to touch the Ark upon which God’s glory descended, so no one, not even Joseph, was to touch Mary, upon whom the Spirit of the Lord would overshadow (Luke 1:35).

Unlike the Ark of the Old Covenant, which was carried conspicuously in procession before the people of God, Mary lived her life in obscurity.  Anyone sharing the streets of Nazareth with Mary would not recognize her as the Mother of God (except, perhaps Elizabeth, her cousin).  Yet she still retains that special lofty position that God has given her.

This relative obscurity benefits us in that Mary is more approachable as a human being, just as Jesus – true God and true man – is also accessible to us.  To know that the Son of God had a mother puts our minds at ease.  We all share this most important of human relationships.  Most of us reserve a special place for the woman who gave us life – or more accurately, shares that life-giving power with Almighty God.  How much more blessed do we consider the one who gave life to the Son of God?

Fr. Jim Tucker is a priest in the Archdiocese of Newark, New Jersey, and the founder of the Catholic Creativity Community which is “for anyone interested in exploring the themes and works of the great Catholic authors of the past, both long past and recent, and everywhere in between.” He’s a writer at heart, and someday *I* look forward to seeing his fiction published.

Now and at the Hour of Our Death, by Ellen Gable Hrkach