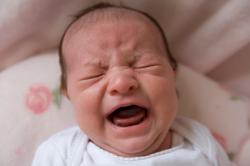 I hear the bathroom door open, followed by the sound of a baby wailing.

“Work your magic, Mama,” my husband says. He sounds pretty calm, but I remember when he first did this, six years ago, with our oldest daughter.

I was taking my first shower in 36 hours after her birth, savoring the heat and the pressure of the water (which were far better than what we had at home), when he came in the bathroom. He was a bit frazzled, though calm.

“Hey there.” My voice, from the shower, is enough to soothe this infant, just as it soothed his older sister six years ago.

I can’t help but think about this with wonder. I’m not a Baby Person (except sometimes with my own), but my babies don’t care. They know me. They know my voice. And, whatever my failings, they want me.

It’s not much of a lesson in listening, really. And yet…and yet, isn’t the first part of listening — really, actively listening and not just hearing — recognition? I often have to recognize that the voice I’m hearing is one that I can trust, one that has the right to give me information, one that won’t steer me wrong or put me down.

This year, I’m focusing on listening, whether it’s the person on the other end of the line or the room or the person pulling at my hand. I feel called to listen, to explore what that means for my life. My model in this is Mary, who listened when the Gabriel told her the most amazing news, who listened to Simeon and Anna, who listened to the cry of her Son from the cross.

So this year, as I try to listen, I’m going to remember that in this, as with so much else, I can turn to Mary and use her example.

image source (no, that’s not my kid, though I do have pictures like that)

Clutter on My Desk, in My Mind, in My Soul

Help for Us All