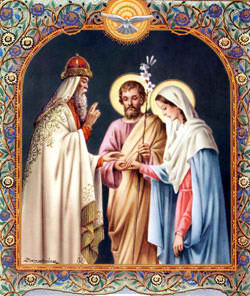 It’s easy to forget that Mary was a married woman. It’s also easy to imagine that marriage, for Mary and Joseph, was something easy.

Mary and Joseph’s marriage didn’t exactly get off to an easy start.  They were engaged and Joseph had promised not to “defile” Mary, because she was a consecrated virgin.  He was really marrying her because, in that day and age, there was no security in being a single woman.

And then she turned up pregnant.  This was the girl who was supposed to have promised to remain pure.

Mary didn’t struggle with NFP, because she was a virgin and she remained a virgin.  She didn’t worry about whether it was the right time to have a baby or whether she would be able to handle the next swaddled blessing.

That makes Mary’s marriage a little…different than mine.  It makes me wonder just what I can learn from her when it comes to marriage.

But maybe it also points us to some of the truths of marriage and to some lessons that we sometimes forget.

Mary gave birth to the Savior, and then she raised him.  She did it with the help and support of a man, a man chosen by God.  Joseph was the head of the family, and that’s no small thing.  Angels appeared to him, and he was the earthly male role model — the man Jesus knew as Daddy in the flesh.  How do I support my husband in his role as head of our family?  How do I encourage him — with a hot meal, a smile in the evening, my undivided attention?

Life in Nazareth wasn’t easy, but it was as normal as it could get.  Mary didn’t have a slew of servants at her disposal.  She and Joseph had to work — really, truly work — in their life together.  There were laundry piles and dirty dishes and meals to prepare.

It’s there, in the boring, ordinary, common life…it’s there that I see Mary and Joseph.  They’re holding hands and smiling at some shared joke.  Maybe it’s a toddler mispronunciation they’re remembering together.  Could they be thinking of Jesus’ first steps, of the journey to Egypt, of the trip to Jerusalem searching for Jesus?

Marriage is a commitment of the highest order, and Mary stands before us, not as an inaccessible perfect wife (though she undoubtedly was), but as an achievable sister-in-arms.  She taps us on the shoulder and urges us to put the computer away, to bake a pan of brownies, to write a little unexpected love note.  She shows us Who should be at the center of our marriage, reminds us where it is we’re trying to reach, prompts us to reach, together, for the many graces wrapped up in the sacrament of marriage.

She knows how hard it is in this day and age — it was hard then, too, though the standard was to stay married.  She sees the obstacles in front of us and she leads us, once again, back to her Son.

Originally published in a modified form at Faith & Family Live.

The Rosary, by Garry Wills 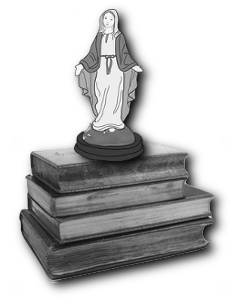