Mary as a Model of Gratitude 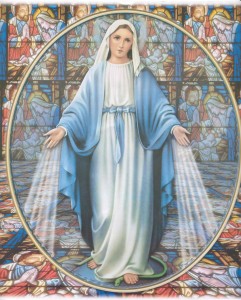 It’s Thanksgiving week, which means, for a number of people in the United States, that there is A LOT to get done. Not only does Advent start on Sunday (no panic here, nope, not me), but there’s a meal of some sort or other to plan for Thursday. Or, if you’re not planning a meal, then you’re probably attending one. Or maybe it just means that your workflow is different than normal (by “different,” I mean “heavier as a result of a holiday weekend looming ahead of you”).

So, as gratitude is at the forefront of our mind this week (and last week, for some of us), I couldn’t help but think of Mary as a model of gratitude.

Her presumably predictable life was interrupted by an angel asking her if she wanted to be an unwed mother. Not only did she say yes graciously, but she thanks God.

And then, a huge trip while in the throes of morning sickness to see an elderly relative who’s unexpectedly pregnant. This whole trip smacks of pain-in-the-hiney to me, but we hear not a word about that aspect of things from her (and in fact have to do some research to find out the extent of the trip between Nazareth and Judea). She calls herself blessed, offers herself in service and support, and gives Christians everywhere a model of service as thankfulness.

Before her baby was even born, she found herself on the back of a donkey, headed to the middle of nowhere, where there would be no room and where she would give birth in the equivalent of a barn. We don’t have a record of a litany of complaints or criticisms. In fact, she welcomed a host of scraggly shepherds and probably the half of the town they brought with them while they were rejoicing through the streets after the light show in the fields. She was a gracious hostess when she was only a few hours post-partum and not even in a proper bed!

She does her duty and takes her new infant to the Temple and is told her heart will be pierced. Nothing like a dire prophecy to dampen your day, but Mary seems to just take it all in with, I imagine, a smile.

And then there’s Jesus, the twelve-year-old scholar, hanging out with the teachers and doctors at the Temple while his parents look high and low for him. Does she scold him? Not so much–it’s more like she reminds him of where he belongs even as he reminds her that he’s not really hers.

How often do I approach the interruptions and inconveniences in my life by thanking God? Am I cheerful and giving even when I’m in pain or sorrow? Do I look beyond my own expectations and joyfully accept the blessings God sends me through other people, even when they’re unexpected or different than what I might want? Am I open to God’s graces from every area of my life? Do I look for Jesus everywhere and involve him in all of my life?

As I enter the School of Mary most mornings, I can’t help but see, in every mystery of the rosary–and beyond–how Mary thanked God in her very being, in everything she did and said and was. She’s an example of being a human being and giving glory to God even while doing all the things that life demands.

So this week, I’m going to try to consciously look to Mary as I consider how very much I have to be thankful for. Can I be thankful even for those things that seem to be the opposite of what I want or need? Will I allow God’s grace to work through me, in me, around me?

An Atheist and a Catholic: A New Series