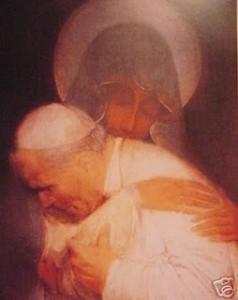 My glimpse of what a truly special guy John Paul II was came while my husband and I were sitting in the living room just a few nights ago.

My husband, who’s of the strong and silent type about pretty much everything, had a strange look on his face as we watched a special about John Paul II on the History Channel.

“It’s still hard to think of anyone else as pope,” he said.

In those ten words, that one sentence, I realized that my husband, like so many others, truly loved JP2. His love, unlike mine, doesn’t come from being steeped in JP2’s writings, but rather from the experience of growing up Catholic with JP2 at the helm of the Church.

“Benedict’s quite a papa,” I said, feeling like I needed to add something, somehow, to the discussion.

I spent Sunday afternoon thinking about JP2’s beatification and, finding myself with some uninterrupted time, even read the homily. Though I wasn’t up at 2:30 AM to see the actual beatification, I do have plans to watch it (EWTN has a whole JP2 beatification mini-site, and they’re re-airing their coverage a couple of times in the coming week if you missed it).

I was feeling the BIGNESS of it, and when I read this in Benedict’s homily, I realized that it’s big for many reasons:

Today is the Second Sunday of Easter, which Blessed John Paul II entitled Divine Mercy Sunday. The date was chosen for today’s celebration because, in God’s providence, my predecessor died on the vigil of this feast. Today is also the first day of May, Mary’s month, and the liturgical memorial of Saint Joseph the Worker. All these elements serve to enrich our prayer, they help us in our pilgrimage through time and space; but in heaven a very different celebration is taking place among the angels and saints! Even so, God is but one, and one too is Christ the Lord, who like a bridge joins earth to heaven. At this moment we feel closer than ever, sharing as it were in the liturgy of heaven.

When I think of how I love JP2, I get sort of overwhelmed (which is why, I guess, I’ve never really written about it). It’s like describing why a favorite aunt is your favorite…there are so many reasons, and quite a few of them are intangible. 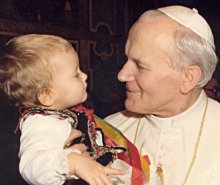 A few years ago, I compiled some great posts about John Paul II for a Loveliness Fair, and I found myself clicking around and rereading a few of them. Then I reread the homily from yesterday’s beatification.

John Paul II had quite a devotion to Mary, and it was a lovely, tender, strong-as-nails devotion. From the homily:

Karol Wojtyla took part in the Second Vatican Council, first as an auxiliary Bishop and then as Archbishop of Kraków. He was fully aware that the Council’s decision to devote the last chapter of its Constitution on the Church to Mary meant that the Mother of the Redeemer is held up as an image and model of holiness for every Christian and for the entire Church. This was the theological vision which Blessed John Paul II discovered as a young man and subsequently maintained and deepened throughout his life. A vision which is expressed in the scriptural image of the crucified Christ with Mary, his Mother, at his side. This icon from the Gospel of John (19:25-27) was taken up in the episcopal and later the papal coat-of-arms of Karol Wojtyla: a golden cross with the letter “M” on the lower right and the motto “Totus tuus”, drawn from the well-known words of Saint Louis Marie Grignion de Montfort in which Karol Wojtyla found a guiding light for his life: “Totus tuus ego sum et omnia mea tua sunt. Accipio te in mea omnia. Praebe mihi cor tuum, Maria – I belong entirely to you, and all that I have is yours. I take you for my all. O Mary, give me your heart” (Treatise on True Devotion to the Blessed Virgin, 266).

What I think has been the most touching to me, though, was Benedict XVI’s closing statement from his homily, where he reflects on his friendship with John Paul II:

Finally, on a more personal note, I would like to thank God for the gift of having worked for many years with Blessed Pope John Paul II. I had known him earlier and had esteemed him, but for twenty-three years, beginning in 1982 after he called me to Rome to be Prefect of the Congregation for the Doctrine of the Faith, I was at his side and came to revere him all the more. My own service was sustained by his spiritual depth and by the richness of his insights. His example of prayer continually impressed and edified me: he remained deeply united to God even amid the many demands of his ministry. Then too, there was his witness in suffering: the Lord gradually stripped him of everything, yet he remained ever a “rock”, as Christ desired. His profound humility, grounded in close union with Christ, enabled him to continue to lead the Church and to give to the world a message which became all the more eloquent as his physical strength declined. In this way he lived out in an extraordinary way the vocation of every priest and bishop to become completely one with Jesus, whom he daily receives and offers in the Eucharist.

I didn’t know John Paul II in real life. His picture hangs in my house thanks to the gift of a priest-friend of a papal blessing for our marriage. But, more importantly, his spirit inspires us to grow closer to Mary and to live more faithfully to the Church he served so well and so long. 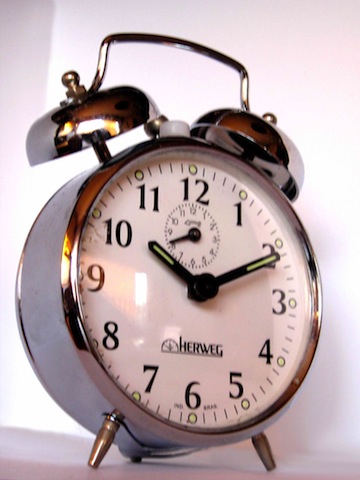