Mass at the PAC

Our parish has a brand-spanking-new Parish Activity Center, which everyone calls the PAC (pronounced “pack”). I’ve tried to break this habit in myself, because I find it annoying in the way that peevish things always are, but with no luck. When we planned to build the PAC, we knew we would have to have a weekend Mass there. Our dear little church only seats 150 – and that’s jam-packed-uncomfortable with people standing in the back – and our little farm town and surrounding area are growing steadily.

Like so many other people, one of the things I truly love about our parish is Mass in the church. It’s the opposite of what I grew up with, and it’s so peaceful. I just love it there.

We’ve had some parishioners with strong aversions to Mass in the PAC. “It’s just not the same,” they start, and they finish with something like, “we’ll just go to the church.” I understand, and we’ve seen an increase in the two Masses that are over at the church. Now, as I always point out to parishioners who use that as a foundation for the “everyone hates Mass at the PAC and we shouldn’t schedule important ones there” argument, we have made some scheduling changes – namely, no religious education on Sunday mornings – that have allowed people to choose the Mass time that truly works best for their family. At the early Mass we usually attend, there’s an influx of new faces, most of whom I know were attending the later Mass because of religious education.

But we’ve also had some support for the Masses. When we have Holy Days of Obligation, it sure is nice to have a seat if you have the tendency we do to arrive five minutes early (if we’re lucky). The same is true for the 10:30 Mass, which is the most popular time. Having this 10:30 time allowed Father a break – by 12:30 on Sundays before the PAC, he had done three Masses. That’s asking a lot. Imagine running a marathon…every single week.

So I had only been to one Mass in the PAC – All Saints – before this weekend. We’re just Saturday or early Mass people. One time, a few years back, Hubby accused me, “You would go to the late Mass!” and I asked, “But don’t you enjoy sleeping in?” His reply still makes me chuckle. “That’s what Saturday is for.” My family’s priority is the time. Other people prioritize the place. That’s OK. It’s the beauty of the differences that make us a parish family, right?

On Sunday, Babycakes woke up with a fever and a listlessness I just couldn’t take out into the world, and so Hubby went early and I went to Mass in the PAC. As I walked in and took my seat well in the back (some things never change), I felt the dread well up. How was I to pray? There were no kneelers, and everyone was chumming with their neighbor. Good: fellowship is high. Bad: Sarah has some serious praying to do. I settled on bowing my head, folding my hands, and closing my eyes. And you know what? I prayed. It worked. Maybe this wouldn’t be so bad.

It wasn’t the same as Mass in the church. But I wasn’t expecting that it would be. I knew better. As I waited for Mass to begin, I felt the dread mounting – Ah, I thought, now I know why those people have been so vocal. There’s no art on the walls yet – it’s just a big white room. The statues of Mary and Joseph are standing on the floor due to an unfortunate accident with the pedestals. Everyone sits on old folding chairs, the metal kind. The choir’s up front. It was all reminiscent of almost every single church service of my youth. There was a part of me waiting for the altar call…before Mass ever began.

And then, Mass began. And it WAS Mass. Being in a big bare hall didn’t change the Real Presence. Jesus has style and grace, even there. I was near tears at the Consecration, just like usual. I was overcome, just like usual.

As I walked out, I realized that it wasn’t so bad – in fact, it wasn’t bad at all. It was Mass – just what I needed.

Star of the Sea in Boston 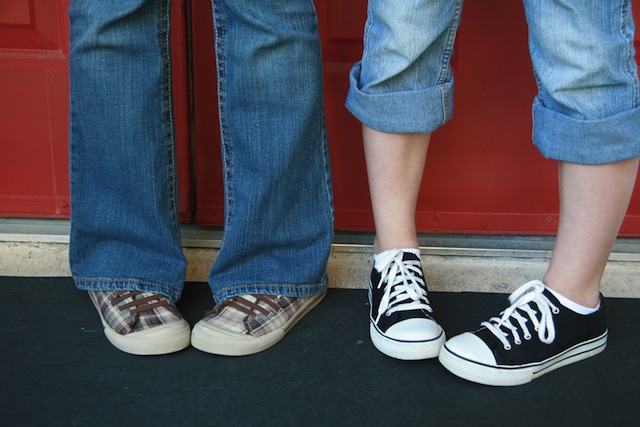 Our Lady of Girlfriends