Today, I bring you another gem from Ellen Gable Hrkach’s series of guest posts on the rosary. You can read more about Ellen in my introduction or at her blog. 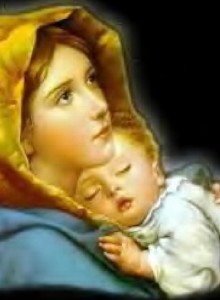 “The Rosary is a powerful weapon to put the demons to flight and to keep oneself from sin…If you desire peace in your hearts, in your homes, and in your country, assemble each evening to recite the Rosary. Let not even one day pass without saying it, no matter how burdened you may be with many cares and labors.”

Years ago, before I had children, I worked as a court reporter. During one pre-trial hearing involving a dangerous offender, the defendant (who was not being cooperative) had already been restrained in a full body shackle as well as handcuffs.  Because he was resisting, the officers sprayed mace in his eyes.

He wasn’t a big man, approximately five feet six or so, but he was muscular. With eyes tearing, he began to spit, first at the crown (prosecuting) attorney, hitting the man’s cheek, and then at the judge (landing on the floor near the clerk’s desk), and finally,  his spittle ended up on my desk.

I cringed, then continued taking down the testimony on my stenograph machine, making a mental note to disinfect my desk as soon as possible. After the hearing, the defendant, still restrained in a full body shackle, continue to spit.  I watched him as the prisoner box was opened.  His eyes stared straight ahead and he was frowning.

What frightened me was the glaring look in his eyes.  I had never seen anyone stare with such evil determination. A police officer reached in and pulled him out. As the defendant stepped forward, he immediately rammed his head into the accompanying police officer’s face.

I still remember the look in the defendant’s eyes as he used his head as a weapon against the officer, the officer’s shocked and bloodied face, and six police and correctional officers jumping on the defendant as the defendant hurled each officer off of him.  It was all surreal to me, like in a dream or a movie.  The defendant seemed to have superhuman strength.

As the melee of defendant and officers started to move in my direction, I immediately became concerned for my own safety.  The clerk leaned over and whispered, “We need to get out of here.”

I grabbed my expensive stenograph machine and the two of us slipped into the jury room behind us.  We stood close to the door, peeking through the crack to watch was what happening. We were shocked at how seemingly superhuman the defendant was.  It took several minutes, but the defendant was finally subdued and taken away. We were all relieved, but in the days following, I began experiencing nightmares.

The real problem began when I was served with a subpoena to testify at the assault trial. Just thinking of this dangerous offender and the apparent evil in his expression frightened me.  I couldn’t eat; I couldn’t sleep.  I began to conjure up images that he would hunt me down and kill me if I testified.

Finally, I determined that I was not going to let that man take away my peace of mind.  I sat down and said a rosary for Mary’s intercession that God would protect me and help me to be a good witness for the prosecution.

Weeks later, at the trial, it was nerve-wracking and frightening to testify in front of the defendant and all the others in the courtroom.  It was a long half hour while I testified, but I told the truth, to the best of my ability. When I left the courtroom, I breathed a sigh of relief.  I was especially happy that it was all over.

Two years later, however, I received a subpoena to testify at another trial involving the same incident. At that time, I was pregnant with my oldest son and all the original worry and fear took hold of me once more.

I brought my anxiety once again to Mary. If they needed me to be a witness, then I would again do my best.  I began to make arrangements to travel to court (now three hours away).  Thankfully, two weeks before the trial, I received a phone call that they would not need me after all.

I have no idea where this defendant is now, 25 years later, or if he is still alive.  But Mary taught me that if we bring our worry and anxiety to her, she will take care of the rest.

A Mother of Tears