Room to ramble: Though Christmas is almost here, it feels a little…distant still. Maybe it’s because I missed both of our family Christmases this weekend, due to the sick baby. Maybe it’s just my state of mind.

In thanksgiving: For the wood stove. For the heaters.

Kitchen meanderings: The pipes under the kitchen sink are frozen. That means the dishes I should have done yesterday are piled high and it’s unclear if they’ll get done tonight or not. Tonight is taco night…if I make it to the store. If I don’t, it’s whatever-we-can-find night or maybe even pizza night.

Nose inserted: I finished Brisingr yesterday afternoon, and it was a huge disappointment. I’ve added three books, in addition to Real Women, Real Saints (which I left at the doctor’s office last week and won’t get back until next week) and Parents and Children:
May Bird and the Ever After, by Jodi Lynn Anderson
You’re a Better Parent than You Think You Are, by Raymond Guarendi
Sink Reflections, by Marla Cilley (the FlyLady)
I’m a bit ambitious, all of these books all at once, but it’s in the air at Christmastime. It’s cold out, there’s a breeze going through my house, and, well, I want to curl up and read. Whether it will happen or not is something else entirely, but I can dream, can’t I?

In my ears: This week, I can turn my iPod back on, and the first thing I’ll do is catch up on The Secret Adversary. I have been listening to podcasts here and there on my laptop, and I have been enjoying the silence I had forgotten I needed. The challenge, then, is to balance the silence and the iPod.

Around the house: Babs in the other room, calling for me. Space heater under sink, working diligently on the pipes. Dryer just stopped (another tactic for frozen pipes). And, just now, the babykins waking up. Time to get moving!

A favorite thing: The silence of the early morning.

For the rest of the week: Wrap-up a few projects at work (and likely start a few new ones, despite my best efforts) and wait in joyful anticipation! 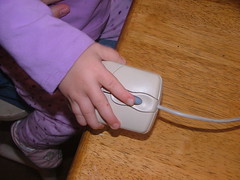 Must Be Monday Daybook

The Back Online Daybook