Go see the full round-up of Simple Woman Daybooks over at Peggy’s place.

Outside My Window…it’s foggy and gray and on the verge of sticky.

I am thinking…about today’s Gospel.

I am thankful for…still sleeping kids and hot coffee and a text message last week that I will be an aunt.

From the kitchen…where I sit, there is silence, beautiful silence. It won’t last much longer, but I’m going to enjoy it for as long as it does last.

I am creating…this post. And a couple of others in my head (though they likely won’t get written until some other time, because Miss Muffet just joined me).

I am going…to go get a shower fast! after I’m done with this post.

I am reading…Firestorm of Dragons, edited by Michele Acker & Kirk Dougal. I just started it yesterday, and though it’s different than my usual fare, it’s had me laughing (which I was not expecting) and I’m thoroughly enjoying it.

I am hoping…to get some things done today and this week. I feel like I’ve been battling ineffectiveness lately…and losing.

I am hearing…the sound of the fan at the other end of the long kitchen table and the TV from the other room, where Miss Muffet is waking up slowly.

Around the house…there is stillness and anticipation. It is a Monday feeling, an early morning feeling, and one that I will sacrifice sleep to enjoy.

One of my favorite things…is the smell of tasseled corn. Have you ever been in the midst of hundreds of acres of freshly tasseled corn? This is one of the farmy things I want to write about – the words are sloshing around in my head and banging on the edges of my fingers (so why am I doing this post instead of that one, you ask? Well, that corn post isn’t quite done percolating…)

A Few Plans For The Rest Of The Week: Write that corn post, write another post on Mary that’s also been banging around in my head, do some bridal shower planning for our oldest niece, catch up on a couple of my favorite podcasts and blogs, and a whole list of things for work at the parish (oh yeah, that thing called work!)

Here is picture thought I am sharing… 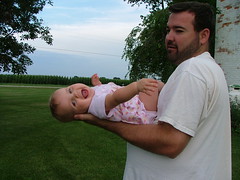 A Queen, a Bucket, and a Daybook