(Not So) Quickly on a Friday

1: The weather outside is…

…delightful.  We were outside for most of the afternoon yesterday, between the park and the multiple trips around the block.

I don’t want to rub it in, but I’m lovin’ life in the south (the south that has not gotten snow).  And the nieces are wonderful too, full of style advice and witticism and unexpected help.  We’ll cry when it’s time to go home (and not just because we’re flying through DC).

2: Meeting the Man Behind the Fame

It turns out that the Catholic Foodie clan are as nice as they seem in their show.  Not only do they offer to come over and visit when I’m in town at my sister-in-law’s house, they cook dinner.  And WHAT a dinner…chicken and andouille gumbo with a salad full of garlic and other things that were yummy and unfamiliar.

The real kicker, though, was being asked by Junie B., my nine-year-old niece, if the Catholic Foodie kids could come back over today.  He said his kids were asking the same thing today.  (Mrs. Catholic Foodie, the lovely Char, seems to have been quiet about coming back to see the rowdy Reinhards.  That’s too bad, because I think she’s the secret behind the show, kids.  Talk about a gem!  My sister-in-law and I agreed that next time I’m in the area, we’re going to see about getting together with her them.) 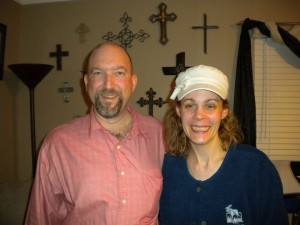 In a moment forbidden from photography (or posting online, at the very least), I heard a rumor that there were adults playing Rock Band with the kids.  One of them was wearing a hat.  No names though.  We are all about protecting pride on this blog.  🙂

I heard about the tragedy with Gerard Faucheux on both Catholic Music Express and Catholic Moments this week, and my heart broke.

And then it broke again.

Age 42, this Catholic musician was also his father’s caregiver, and was on the way to take his dad to the doctor, with his mom, when they were broad-sided and killed.  He leaves a wife and four children.  I found his obituary here.

The Faucheux family will be in our prayers in a very, very special way.  I hope you will join me in praying for them.

You know by now (or maybe you don’t) that I send in a Mary Moment each week to Catholic Moments (this week’s seemed to be tailor-made for the death of Gerard Faucheux, and was actually referring to my brother-in-law’s widow).

Well, this Saturday (as in hours from now, since I was reveling in nieces today instead of blogging), I’ll be podsquatting* on Catholic Weekend.  I suspect there will be a food fight, but there’s no telling with that crowd.

You’ll be able to listen live at SQPN Connect…I think.  (Nothing like waiting until late in the day to post.  Ah, well.)

*Podsquatting is a term coined by the hilarious Maria Johnson (who would much rather write scripts than “squat” on someone’s show…though you wouldn’t know by hearing her all over the SQPN dial!).  It refers to appearing on other people’s podcasts regularly, without any intention of having your own.  I think I’m going to have t-shirts made.

Now that I can capture my tweets from my phone, I’m catching more of my five-year-old’s mispronunciations.  My favorite this week: mack-a-tilly.  I didn’t see this one coming.

Junie B., the ever-adventurous nine-year-old niece, asked me, as I was heading into the bathroom to help said five-year-old, if that child on the toilet knew what laxatives were.

The first thing out of five-year-old Elizabeth’s mouth when I made my way in was, “Mommy, what are mack-a-tilly?”

After she picked me up off the floor, I told her.  Too bad my phone was in the other room for that one!

(Now, a day or two later, I’m wondering how this came up in conversation between the two of them.  Do I really want to know?)

Speaking of mispronunciation, Elizabeth is cracking me up this week.  We’re visiting family, so maybe she’s been saying these words wrong all along and I’ve only just paid attention.  Among my favorites: photographer, interesting, ridiculous.

We’ll be expanding our vocabliary to include more, for sure.  Why wouldn’t we?  🙂

I have big weekend plans that involve living the role of adoring aunt, dorky sister-in-law, and too-cool-for-school mom.  Now, if I only remember to take pictures… What are you doing this weekend?


Have you seen the rest of this week’s Quick Takes?  Be sure to visit to Conversion Diary to check them out.