On the Feast of Our Lady of the Rosary 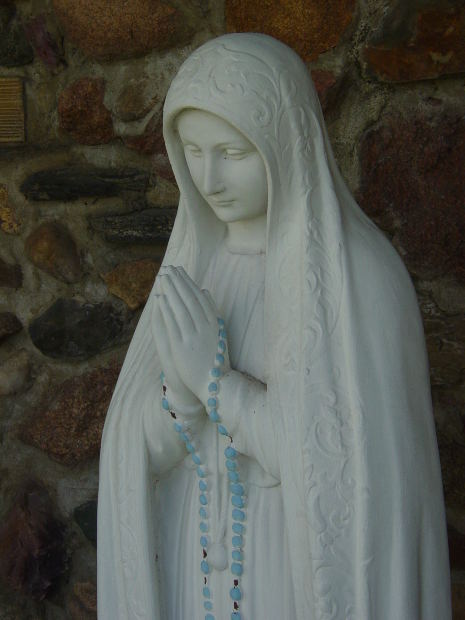 I love the story of Our Lady of the Rosary. I love the rosary.

No surprise, then, that I’m over at Catholic Exchange today with some of both.

As a new member of the Catholic Church, there were many “secret handshakes” that baffled me.  There were a lot of questions I didn’t even know I should ask and a lot of things I didn’t learn until I was hired as staff at our parish a few years later.

Prayer was an area that was particularly interesting to me.  I was comforted by one prayer in particular: the Hail Mary.  When I couldn’t find the words to ask for comfort, to look for guidance, to thank God for his generosity, the Hail Mary waited as a 41-word answer, a prayer easily remembered and poetically appealing.

I learned it with a rosary in my hand during a difficult time in my boyfriend’s family.  I sat on the bed in my apartment, awkwardly holding the beads and squinting down at a prayer booklet.  I felt like I was failing at a new sport at first: I lost count on every decade and found myself mentally wandering off even though I was unfamiliar with the prayers and was trying to remember what mystery I was supposed to be meditating.

The rosary became a support I’d use during difficult times, long drives, or sleepless nights.  I didn’t start trying to pray it daily until after the birth of my first child.

Read the rest at Catholic Exchange.

And here’s something fun and useful and good for everyone: Joe Wetterling is relaunching his blog, Ho Kai Paulos (which means something like “I am a helpful, smart person who will aid you in being a better Catholic”), today.

He does a monthly piece at the New Evangelizers blog and I so enjoy his writing.

Here’s a bit about his blog and what we can expect. Trust me, you want to check this out!

What is Ho Kai Paulos?

HKP is for Catholic adults that want to know their faith better.  We’ll cover the very basics of the Catholic faith – prayers, terms, and customs, as well as catechism, Church documents, and Sacred Scripture.  All of it with be done in manageable chunks, designed to help Catholic adults to understand, absorb, and apply the material.

The site is named for St. Paul — specifically, for the phrase in Acts 13:9 that Saul was “also called Paul”. An old friend compared my reversion to the faith to St. Paul — an undeserved comparison, but one that’s stuck with me, and one I’ve tried to live up to in some way.  He was possibly the first distance educator, and he had a way of being direct and clear in his writing.  That’s my aim at HKP.

What’s special about HKP?  There are plenty of other sites.

HKP is written by a professional educator.  My bread and butter is adult learning, and that’s my approach to evangelization and catechism — to put things in a way that adults can understand and absorb.

What can we expect after the relaunch?

My first major project is a series I’m calling “God from the Ground Up”. We’ll start from the most general ideas (What do ‘objective’ and ‘subjective’ mean? What is absolutism versus relativism?) and work stepwise to the most specific (How should a Christian live? What is the Church?). There are a lot of steps in between, and we’ll take them slowly — with brief, clear explanations, plus lots of suggestions for further reading and listening on each topic. You can dip your toe into each subject, or use the follow-up links to dive all the way in.

I’m working on several shorter series of posts, including one on liturgical vestments and objects, and one on the physical elements of a church. (You’ll never wonder why the buttons on the church elevator say “N” and “B” again.)

So get on over there and see what he’s doing.

The Blessing of a Broken Brake Line

The Answered Prayer of a Little Sister