One Decade at a Time

Posted by Sarah Reinhard | Inspired by the Virgin Mary, reflection | 6 |

I never thought I could do it. The rosary is a whale of a prayer (I thought then); it’s so hard to remember the mysteries; I just don’t have the time. Oh, my list of reasons was impressive, but looking back, I realize now that it wasn’t a list of reasons at all: it was a collection of excuses that made me feel better about not even trying.

I’ve tried a lot of different devotions, floundering here and there. Life changes fast, and just when I think the routine is ironed out, life changes radically or something comes up. Usually, these changes open new windows of opportunity for me, although I don’t often see it that way right out of the gate. No, I’m usually kicking and screaming in my head, resisting the change just like I always do, scrunching my eyes shut as I clamp my hands over my ears. “You can’t make me!” Well, yes, actually, He can. But He never does. No, He just shrugs and says, “OK, if that’s how you want it,” with raised eyebrows and a sad look in His eyes. Then, when I’ve regained some of my composure, I open my eyes and blink in the dawning light of “it’s not so bad and in fact might be better than before” that is waiting for me to discover it.

The rosary has been a devotion I come back to time and again. My goal is to pray one every day…but I’ve had to get creative as to how that happens. The hurdle I face is that I’m just no good at sitting down to do one thing, especially with a burgeoning to-do agenda and a tendency to oversleep and douse out quickly in the evenings. Mother Mary, not to be outdone in the arena of motherhood, has helped me, and maybe that’s why I keep coming back to the rosary.

How can I make the time to pray a rosary every day? One decade at a time.

If you’re counting, there’s room in my day for a lot more than five decades! And so I encourage you to try it. Yes, I know you’re busy, and I’m not asking you to make yourself busier. Think about your time as God’s first, and try out giving it first to him, even as you putter around doing your everyday tasks. Think of your time as a gift, one that multiplies when you give it back to He who gave it to you in the first place. Think of Mary, standing beside you throughout the whole day, hugging you when you need it and propping you up when you falter. Think of your Mother smiling at you and helping you remember and keep track of the prayers on your fingers. Think of your Father, and how proud He will be of you for trying.

How can you make time to pray a rosary every day? One decade at a time.

Looking Closer at the Hail Mary: IS 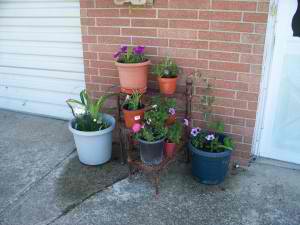