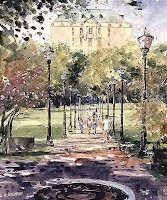 Image source
The Week 11 guide for the Online Retreat in Everyday Life is here.

I remember it clearly. He was picking me up from the airport and had suggested stopping by the Ohio State campus for a walk. He was on the brink of taking the leap – at last – to go to college, fulfilling a lifelong dream. He told me he needed inspiration, and besides, it was on the way home.

For my part, I never turn down a chance to walk on the Oval and reminisce about how much that university means to me. It’s about more than football and college memories. Somehow, while I was there, I cam of age. And then, that night, it became a part of my future in a way I couldn’t have predicted.

There’s a tradition at Ohio State that spans back years called the Long Walk. The Oval is divided by many walkways, and the Long Walk follows the longest walkway, bisecting the area. It starts at the farthest end of the Oval and ends right in front of the Main Library, beneath a statue of William Oxley Thompson, one of the first presidents. Tradition has it that Thompson was a minister, and back when graduations were held on the Oval, he could hand you your degree and perform your wedding ceremony, all in one tidy package.

We were holding hands as we started our evening stroll down the Long Walk on that day in July, 2003. I don’t think we were talking – there’s something about the glow of the lights, the shadows of the old buildings encompassing the Oval, the feel of the library in front of you, that always makes me silent. (The same thing happens when I’m in a beautiful old church, and probably for similar reasons.)

At some point near the halfway mark, Bob reached over with his right hand and said, oh-so-casually, “Hey, would you wear this?” Perched on his pinky was a diamond ring.

I had THOUGHT we had an agreement – no ring, no asking silly questions you already know the answer to, no being predictable and frivolous with outdated traditions. As it turns out, he had talked to my father, had taken his mother to make sure the ring was just right, had done all the things that, in my contempt for all things traditional, I had feared.

This week, in our retreat, I thought about my response to Bob on that July evening as I considered how Jesus is holding out his hand to me. It’s not such a different thing. I have my own ideas of what’s right, of what’s supposed to happen, of what my role is. I have this dread of what I think is going to happen, and how terrible it will be to be just like everyone else.

I spend all this time avoiding what’s coming, only to find out that my response, when it comes down to it, is to embrace what’s being offered. That’s all Jesus is asking of us this week.

“Here,” He’s saying, with his arm extended, “take My hand. We’re going to go on a walk, and I won’t leave your side for a second.”

So why is it so hard for me to trust? What will my response be? How can my response be more genuine, more true to what Jesus is asking, more like how Mary responded?